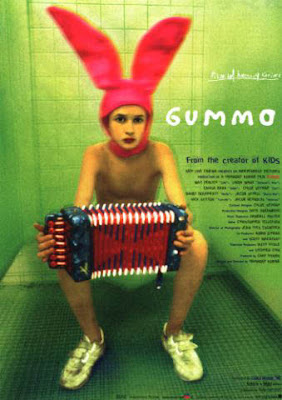 Written and directed by 21 year old Harmony Korine (Kids). Gummo is the dark tale of a town that was hit by a tornado, leaving the people financially and mentally damaged. Gummo mainly focus's on the youth and the film depicts directionless kids, lacking in moral and social education.

Most are shocked by the weird, offensive and sometimes disturbing imagery. Depending on your perspective Gummo is a work of beauty or a vile piece of trash. Which ever your opinion be, the shocking images stick with you well after the movie has finished. We see transvestites, plenty of retarded folk, a gay black midget, plenty of white trash, drunken rednecks, violence towards animals, self mutilation, foul moth young children, a chain-smoking kid in pink rabbit ears, retarded prostitutes, glue huffing, eyebrow shaving, etc, etc. This is all strung together with nihilistic monologue from different characters.
Personally I am a big fan of this movie and like it much better then Kids (Which I also like very much). Still I can understand why others might not be interested in this sort of thing. Gummo is filthy in a way that could only be understood after viewing. Its almost as if a awful stink comes off of the screen with the dirty imagery of poverty. The bathtub scene should sum it all up for you. 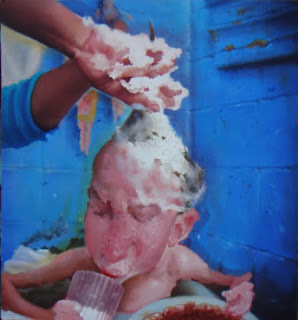