Fräulein Devil is another Nazisploitation brothel on a train flick. Where sometimes sexy and sometimes not so sexy Nazi women are to offer up services to German officers. This train is run by a sadistic prostitute named Elsa, not to be mistaken for Ilsa (Dian Thorn). Elsa shows her loyalty to the Fuher by spying on Nazi officers and the trains prostitutes. More often then not she finds what she refers to as traitors. Even Nazis slip up from time to time and say the wrong thing durring intamate moments and unfortionatly for them Elsa's way of dealing with traitors is a bit harsh and usually results in death, exicution style with a bullet to the back of the head. She also whips and tortures suspected traitors for information. Some of the highlights is a strange prostitute musical scene with lots of pubic hair in frame, a pair of burnt tits, a suicide and a really weird scene where Elsa pretty much rapes a young virgin German soldier and then kills him. There is also some trashy conversation about a man who needs a horse to maintain his erection. I was just upset that there wasn't a horse in the movie. In fact Fräulein Devil is pretty tame in general. Its no where near as disturbing as Ilsa She Wolf Of The SS or as trashy as Bruno Mettei's Womans Camp 119. It lacks the art from Tinto Brass Salon Kitty and generally rips off Hell Train (another Nazi whore-house on wheels flick). Worth owning for collectors and fans of the genre but no where near the top of the list. Fräulein Devil also goes under the following titles, Elsa Fräulein SS, Captive Women 4, and Fraulein Kitty. 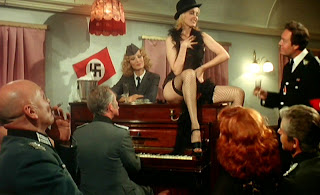