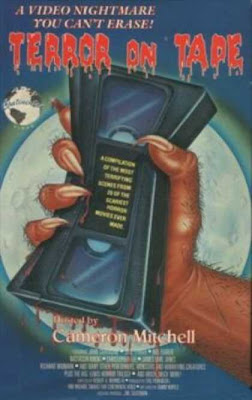 What we have here is a 90 minute or so compilation of gore scenes from movies released on Continental Video. It stars Cameron Mitchell (Blood And Black Lace, Haunts, Night Train To Terror) as a video store clerk who plays the most ghastly scenes from his video collection. The only downfall of the tape is that there really just isn't enough titles on here. We see clips from the same movies over and over again but it still manages to be entertaining compilation.
This thing is long out of print and Continental Video is gone as well, so I doubt this thing will ever be re-released. Still its worth owning if you can find a copy anywhere.
It shows scenes from some of the greats like H.G. Lewis, Blood Feast, Two Thousand Maniacs and Color Me Blood Red. We get clips from the ridiculously gory Umberto Lenzi zombie-camp-fest, Nightmare City. We also get a little bit of tit with Vampire Hookers.
Terror On Tape shows scenes from a few more obscure slashers like Nightmare which is actually a awesome movie with tons of gore.
It also shows clips from a few that I have not yet seen like Slayer which looks really cool and brutal. Another one that I have not seen is Scalps. Scalps looks pretty crappy to me and its not really anywhere near the top of my list of things to see. I think I will stick with Maniac for the time being when I want my scalping's.
We also get scenes from ridiculous monster movies like Return Of The Aliens Deadly Spawn.
Then we get into the cursed and demonic section with movies like Cathy's Curse and The Eerie Midnight Horror Show. This section  also sports one that I have never seen. Its called To The Devil A Daughter and it looks pretty good.
Terror On Tape all in all is a pretty fun sit through and anyone who likes horror compilations should dig this one. Its another good party tape to add to your collection.