Pretty lame Jim Kelly Kung Fu comedy about four martial artists who band together and kick ass in search of a kidnapped woman. Don't waste your time trying to follow a plot on this one because it is paper thin. Also don't expect this thing to be a Blaxploitation flick because it really isn't at all. In fact there isn't really any exploitation value to this one. Its generally a pretty annoying flick with hokey music playing over Kung Fu scenes. Its filled with bad sound effects and I'm not talking about Jim the dragon Kelly's Keeyah. 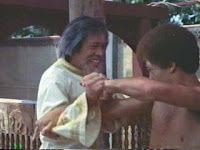 Kelly Fans will get their share of ridiculous Kelly-Fu complete with silly faces, crazy leg movements and absurd noises but for me the only value this movie had was a character named Rhino played by George Memmoli from Mean Streets. He doesn't call anyone a Mook in this one but he does run around topless, do some pretty embarrassing dances, get it on with the ladies, has a food eating competition, dishes out some ass whoopins and has one of the silliest looking outfits in any Kung Fu movie. He looks like a cross between a cowboy and a leprechaun. He wears a sort of Pancho with green shorts and different colored striped socks.
Then we get some leotard wearing bad guys who jump from the trees and smash up picnics. A guy is eaten by a tigers but unfortunately the violence is off screen. We don't get any nudity and there is no blood.
You wouldn't be missing much by skipping this one. Its a bad Kung Fu flick and its not a good Jim Kelly flick. Only worth a watch for anyone who feels the need to see George (The Mook) Memmoli in yet another fight scene. 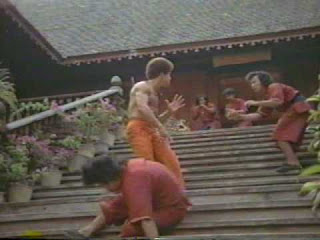