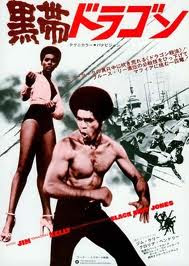 Jim (The Dragon) Kelly plays Black Belt Jones and he is as ridiculous as the genre will allow him to be. Not in the Rudy Ray Moore way, with a foul mouth and slick 70's jargon. In fact he is a gentlemen... Or at least until someone gets in his way. If you do Mr. Jones wrong he will give you a kung fu ass kickin. 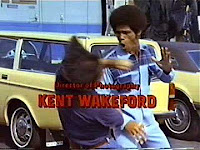 For this reason Black Belt Jones reminds me a lot of Dolemite and the Kung Fu is equally as silly but not because Jim Kelly is awful... Its more because of his over the top indescribable "Keya" and the often hilarious faces he is making while performing his martial arts. He also reminds me a bit of Fred Williamson when he is trying to be sexy, slick or romantic with a lady. 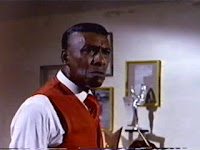 No matter how ridiculous Black Belt Jones is, he is the man needed when the Italian mafia team up with a black gangster named Pinky and his "Bogart's" ("Bogart's is some treacherous motha fuckas"). Together the criminals try to take over a Karate school run by no other then Scatman Cruthers. When Scatman refuses to give up his school, the gangsters come at him hard and we get to see Mr. Cruthers do some Kung Fu and dish out a ass whoopin. The gangsters eventually kill the smiling, pearly-toothed Scatman and Black Belt Jones teams up with Sydney (Scatmans bad-ass Kung Fu daughter). Together Jones and Sydney kick the ass of every mobster, gangster, pimp, pusher and criminal who had any affiliation with the teachers death.
Black Belt Jones also offers some pool hall violence, flying "Panties in my face", girls on trampolines, lots of Afro's, a really ridiculous chase scene, gratuitous "Faggot" calling and a really crazy final fight that takes place in a car wash that is over filled with suds and soap. Another thing that one can't help but notice is that every second another person seems to be thrown through a window. Even Black Belt Jones knows how to relax because when the fighting is all done he likes to hang out with his friends at McDonald's.
So grab a Big Mac, throw your friends though a window and check out Black Belt Jones, I'm sure you will give it a Jim Kelly thumbs-up! 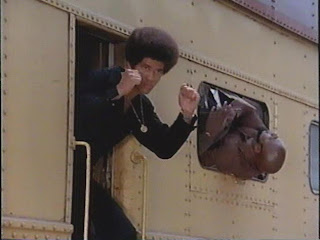