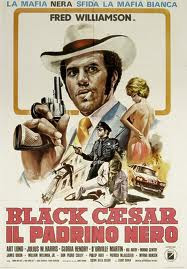 What do you get when Larry Cohen and Fred Williamson make a movie together? You get two of the best Blaxploitation flicks ever made, Black Caesar and Hell Up In Harlem. I saw these movies in the wrong order. Started with Hell Up In Harlem and then Black Caesar. They are two of my favorites in the genre and definitely in my top five.
This one starts off with a young black kid named Tommy Gibbs who does small jobs for criminals in New York city. He gets into a bit of trouble with a crooked cop and gets a pretty bad beating but this doesn't stop Tommy. In fact it just makes his desire for power through crime even stronger.

The movie jumps to the future and Tommy Gibbs is all grown up and played by the genre legend Fred Williamson. Fred doesn't play this early flick off as his usual play boy self. Instead he is mean, relentless and ruthless. Tommy Gibbs takes over Harlem and starts killing off the Italian mobsters. The character of Tommy is so cold hearted that he beats his friends, rapes his wife and even tries to kill his own father.
Its not long before the Italian families decide to wipe Tommy Gibbs out. They start off by killing all of his bodyguards and then they make a move on him. We get one of the greatest chase scenes in action films near the end. Tommy catches a bullet in the gut and escapes to a cab as mobsters follow through city streets. Tommy fights em all off and even strangles one in broad day light, in the middle of city streets. He manages to escape and kills off a few more enemies, including the dirty cop who did him wrong as a child. Tommy paints the cops face black and makes him perform Al Jolson acts. "Sing Mammy, sing it! Sing Mammy, Niger." and then he beats the cop to death. Still at this point in the film Tommy Black Caesar Gibbs still has a bullet in his gut and he is bleeding to death. He makes it to the ghetto where he thinks he is safe but the mean street kids beat him and leave him for dead after stealing his watch.
Black Caesar, although being a exploitation film still makes some powerful suggestions and in my opinion is one of the best in the genre. Both Caesar and its sequel seem to be slightly above many of the others, in the same league with The Mack. 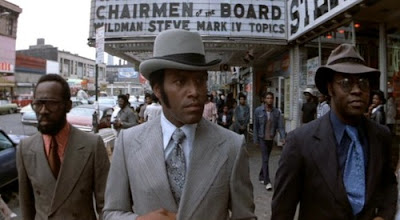