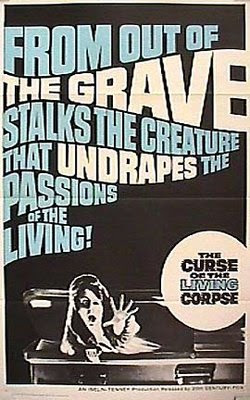 How many times are they going to make this movie. This is one of the most recycled plots in film history. It has been used countless times in forgettable movies. Its the old tale of a wealthy relative who has passed on and leaves the fortune and castle/mansion to family members providing they stay in the old castle foe X amount of time and follow the wishes on the will.
This time the castle and wealth is being left in the will of a crazy old man whom is presumed dead. In the will the old man demands that his children stay in the castle and follow certain orders.

If they fail to meet the demands they will be killed in a way that each individual fears the most. One is afraid of fire. Another afraid of drowning and the crazy old mans fear was being buried alive. Well sure enough the deceased coffin turns out to be empty and the family members start dying. Is the old man back from the grave or was he buried alive? You will have to see for yourself. I suppose out of all the movies that used this tired old plot, this is one of the best.
Still that isn't saying much but at least this one has a bit of gore.

It was directed by Del Tenney who is most remembered for The Horror Of Party Beach which would play on a double bill with The Curse Of The Living Corpse. I'm sure 99% if not all of the late night movie goers who went to see this creature double feature found the beach party monster flick to be the more entertaining of the two. Still The Curse Of The Living Corpse is not a bad movie it just is a bad choice for a double bill. The Horror Of Party Beach was a total fast paced camp flick where this one moves rather slow with an occasional bit of nastiness.  Some of the highlights consist of a death by quicksand, we have lots of cane beatings, a man is dragged by a horse and has his face ripped up, a woman is drowned but the real money shot is a decapitated head served on a platter for breakfast. This thing was rightfully placed on a double feature dvd with the far Superior Horror Of Part Beach. The dvd is worth owning, there for Curse Of The Living Corpse is worth a watch. The dvd has beautiful cleaned up prints of both movies and neither one ever looked so good. 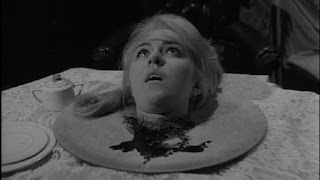 Email ThisBlogThis!Share to TwitterShare to FacebookShare to Pinterest
Labels: Curse Of The Living Corpse, Hauntings And Ghosts