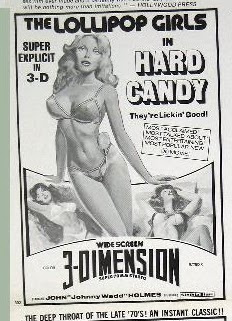 A group of friends and I ventured off to a screening of this 70's 3D sleaz-fest and we all had mixed feelings. The one thing we all agreed on was that the movie was a mess. Hard Candy is about a dork who works for a candy industry and has his new aphrodisiac lollipops stolen from him. The thief sends the pops out "all over the country" for some reason or other and it basically leads to three dimensional sex. Then theres some stupid subplot about three ancient warriors searching for the gates of Troy.
When I said that this movie is a mess, mess might be a understatement. The truth is that Hard Candy is a mish mosh of footage, some of which looks like it was taken from other films and when its all put together its just pure incoherent chaos. Aside from the incompetent film making, Hard Candy is also by far the most obnoxious porno film I have ever seen. Every character seems to be screaming in really annoying cartoonish voices and glass is being smashed constantly. Then we have some of the worst editing I have ever seen and it is accentuated with placement of random images. For instance a dragon might randomly pop up on the screen for no apparent reason and it will be gone the next second. Obnoxious is probably the best way to describe this one. It kinda reminded me of an episode of The Dangerous Brothers or more commonly known The Young Ones.
With all that said, I kind of enjoyed this screening if not for anything else, at least for its weirdness and as if the film wasn't bad enough, the projectionist let the reel fall off the projector, possibly for a better grindhouse experience. I still have my obnoxious 3D glasses from the screening and now I need to find a copy on DVD so I can be reminded of a night of fantastic pornographic torture. 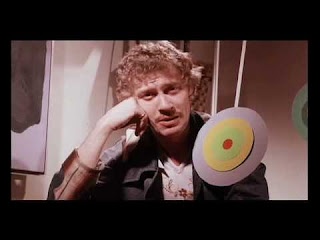