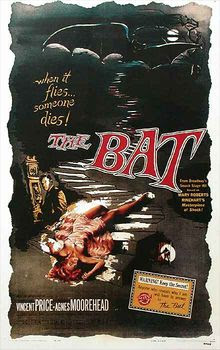 Vincent Price and Darla Hood who most would remember as Darla from Our Gang join up in a murder mystery with killer bats. Well Darla is all grown up for this one and shes no longer a Little Rascal. The funny thing is that in this one she is supposed to be the pretty one but she is probably the ugliest girl in the film.

The Bat is a mystery/thriller about a killer who is on the loose. The killer known as The Bat wears a black ski mask and leather gloves with sharp claws on the fingers. He also infects real bats with rabies and sets them loose on his victims. The Bat stalks four girls in a mansion and kills them one by one along with a few other victims because The Bat believes that the mansion contains a secret room with a million dollars hidden inside which was stolen from a bank. The thing that makes this mystery work so well is that there are a bunch of people who are searching for the stolen cash and we get a bunch of red herrings. I personally had no clue who the killer was until the very end. Another thing is that most of the characters appear to be violent or criminals themselves.
Vincent price does an alright job as a doctor who is caught up in the middle of the mystery. He could be the killer but then again, anyone can be the killer. This movie almost reminded me of a early slasher because of the setting. Four girls in a mansion and a violent killer on the loose. For this reason I couldn't help but wish the movie was a little more violent but this is a 50's flick so I suppose the film is okay for what it is. Its worth a watch for Price fans or anyone who likes mystery's. 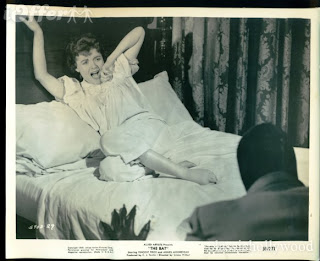 Email ThisBlogThis!Share to TwitterShare to FacebookShare to Pinterest
Labels: Bat (The) (1959), Mystery