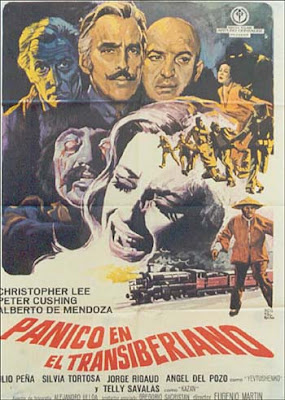 Christopher Lee plays an English anthropologist who discovers a frozen corpse in North Asia which he believes to be proof of evolution. Lee boards a train with his fossil locked in a big crate and its not long before the frozen body thaws out and wreaks havoc on the people aboard the train. 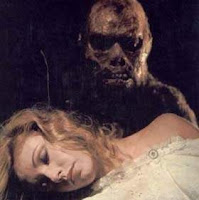 The monster looks pretty cool. Kind of a cross between a Lucio Fulci zombie and a sort of Bigfoot. Its not long before the people realize there is a creature on the train and they star forming they're own opinions on what the creature is. Is he in fact just a thawed out caveman? The religious people think its the devil. The ones who believe in science think its a alien from another planet. The different ideas help keep Horror Express moving along at a nice pace and it stays interesting.
The movie really starts to get good when Telly Savalas (Dirty Dozen, Lisa And The Devil) shows up as a fascist Russian soldier. Savalas enters the train with authority and beats the people for information. When he learns that there is a monster on the train he is ready for war.
Peter Cushing has a big role in this one. He plays a doctor and in one of his finer scenes we get to see Mr. Cushing cut open a head with a hack-saw. 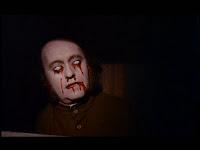 Aside from the head sawing scene Horror Express does have a bit of the red stuff. I wouldn't go as far as to say its gory but it has just enough to satisfy the average horror fanatic. The blood is accompanied by bulging eyeballs that appear to have no pigment left. The blood pours out from the white, bulging eyes and I found it to be slightly disturbing at times.
Another memorable character is a monk. Who rejects his religion for the creature. The monk believes the creature to be Satan and decides to help and protect the monster.
Before the films final, The monster summons up all of his victims and the white eyed corpses come back to life as staggering zombies.
Horror Express is a cool little British/Spanish horror flick from the 70's and it definitely does not disappoint. Usually British films are very tame and tend to not deliver. This is not the case with Horror Express. 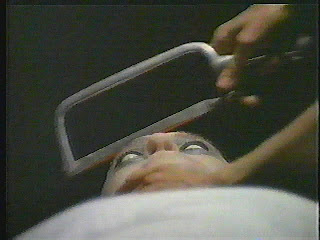