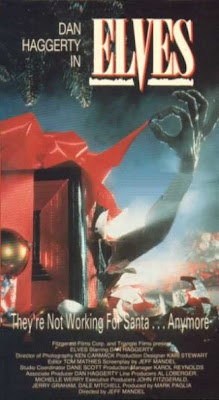 I really had high hopes for this movie after seeing the trailer but it turns out to be a pretty bad 80's monster movie with a lot of wasted potential.
Three girls gather in the woods and do some witchy voodoo type shit and before you can say bah humbug we have a demonic Elf running around and killing people with sharp kitchen knives. Eventually we find out that the Elves were genetically engineered by the Nazis and our main characters grandfather (who turns out to actually be her father) had something to do with the Nazi Elves experiment. I know the plot alone sounds awesome but the film makers really screwed this one up.
The main problem is that the movie just isn't violent enough. When the Elf is actually killing people the movie is pretty cool but it takes ages between each murder. The best scene in the movie involves a cocaine abusing Santa who has his balls slashed up by a knife wielding Elf. Then we got this awesome foul mouthed little kid who spies on his sister while she is taking a shower and when he gets caught he says things like "I'm not a pervert, I fucking like to look at naked girls and you have huge fucking tits and I'm gonna tell everyone" This kid is by far my favorite character in the movie and I wish he had more screen time. Then we have a psychotic mother (Deanna Lund) who drowns cats for fun and is just a general loony bitch. The funny thing is the mother is the only good looking girl in the whole movie (and she does have a nude scene.

The three teenage girls are ugly as sin and I think the Elf might even be slightly more attractive. In the opening we see just a slight bit of nip from our main character but thankfully we don't get any more flesh scenes from these dumb 80's bimbos. However they do walk around in lingerie and bright 80's spandex.
Elves was shot on 16mm but it looks more like video. It must have been a pretty low quality film and this thing went straight to video. As I already mentioned, this movie was so close to being good but just didn't quite do it for me. Normally a movie that involves incest, crazy Nazi mutant Elves and a bit of gore would be praised by me but not this time. This year for Christmas Ill just stick to the classics. Black Christmas (1974) & Silent Night Deadly Night. Bah Humbug! 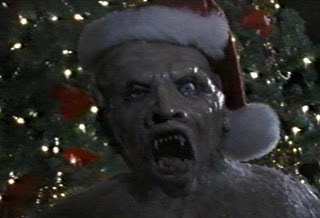