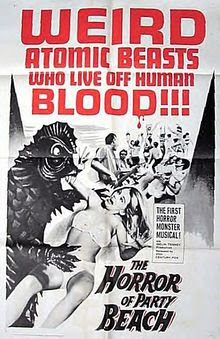 Ever wonder what it would be like if they crossed the beach party movies with a monster movie. Well the answer is The Horror Of Party Beach. Its one of the most fun monster movies of all time. We have pretty girls dancing on the beach in their 60's bikinis and silly looking beach boys in little shorts doing some ridiculously embarrassing dance numbers. Even the violent rebel biker gang will get down for a dance before smashing up a beach party.

Its no wonder that these cats spend so much time dancing. They have their very own beach band, The Del-Aires and they totally rock with awesome surf jams like The Zombie Stomp and Summer Love. The Del-Aires are completely ridiculous (in a good way), you gotta see them in all their lip-singing glory.
Unfortunately for the beach bums and Del-Aires fans it can't be a picnic all the time. The beach goers are terrorized my a monster created from toxic waste that was dumped into the ocean by some very enviorment unfriendly sailors. When one of the waste containers spills a leak and the toxins leaks on to a human skull, the marine life on the floor molds with the skull and forms one hell of a silly looking monster.

It has giant round eyes, a fin on its head and its mouth looks like its filled with hot dogs. The monster also walks like a old hunchback and its near impossible not to laugh. You gotta love these early horror flicks that didn't take themselves seriously and still manage to be way more entertaining then anything people are putting out today. 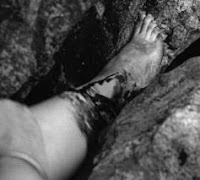 On the other hand aside from being fun The Horror Of Party Beach has its share of gore. Of course its no where near as gory as the Herschel Gordon Lewis pictures but it does have its share of red stuff. Apparently the police were even sent to investigate on the set when someone reported a bloody mess on a rolled up carpet.
The monsters do have a pretty big body count. I'd say its somewhere up in the 30's. We get one big Slumber Party Massacre (not to be confused with the 80's slasher), where "over twenty teenage girls were brutally attacked and murdered". We also have local drunks being mangled and even mannequins are not safe.

In the movie the characters keep referring to the monsters as zombies which just adds to the weird, fun that is The Horror Of Party Beach. The monsters are not zombies and it doesn't take a bullet to the brain to stop these things. Nope, they have to be stopped with sodium. We learn this when a careless voodoo practicing, house maid accidentally spill sodium on the severed arm of one of the creatures. With this knowledge a scientist, the police and regular towns geeks band together armed with sodium to stop the blood-thirsty, hot dog mouthed killers.
The Horror Of Party Beach is a must see for anyone who likes the earlier 50's monster movies. Its pure fun, in the same vain as Faster Pussycat Kill Kill. Check it out for a fast paced bikini beach, monster bash. 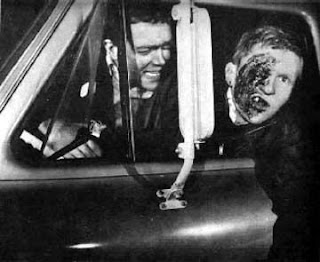