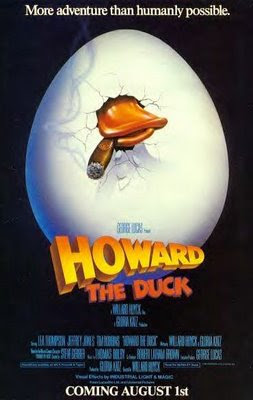 This one was a childhood favorite of mine. I used to sit around with my best friend and rotate this movie and The Goonies. We knew every line and would rewind and fast forward to our favorite parts. Looking back on it now I find it funny that this was considered a children's movie. How did this thing ever get a PG rating? Howard The Duck is filled with perversion and makes constant reference to bestiality.

In one of the most memorable scenes Lea Thompson (from Back To The Future) enters the bedroom where Howard is sleeping, wearing nothing but a short belly-shirt tank top and pink panties. When she bends over to make the bed Howard checks out her ass and says "I have a new respect for the female human anatomy". Lea makes a move on The Duck and as she unbuttons his pajamas the feathers on his head stand up erect. The inter species couple eventually fall in love and its a pretty weird relationship. It just feels like a sex scene is going to break out at any moment.
Then we have this swingers club where people are screwing in pools and on benches as Howard walks around smoking cigars and smoking cigars he does a lot of. If he is not smoking cigars he is probably drinking beer. Even the trailer states that his favorite hobbies are cigars, beer and sex. None of these things would be shown in a kids movie today. The perverse moments go on and on. We get a scene where Howard is reading a pornographic duck magazine called  Play Duck. Then we have a female duck bathing with big breasts and nipples exposed to the camera.

Howard The Duck eventually shifts gears and turns into a monster movie. Jeffrey Jones plays a scientist named Dr. Jennings and he is caught up in a explosion while trying to send Howard back to his own planet. The explosion causes Jennings to start changing. He becomes a huge Ray Harryhausen type of stop motion creature. Howard goes to war with the monster in order to save Earth.
Aside from the big monster, there is a lot of violence in this movie right from the beginning. We got all kinds of violent characters from punks and skins to bikers and kung fu ducks. In the beginning of the movie a couple of punks try to rape Lea Thompson. This is the fist time we get to see Howard use his "Quack Fu".
The only problem with the movie is that it runs a little long. I finishes up at 110 minutes. If they kept it at the 90 minute mark the movie would have probably went by at a nicer speed. Still Howard The Duck is a fun look back to a few decades back when sex & violence was on the menu for children's movies. Its full of crazy 80's special effects, 80's hair, and it is far from the p.c. crap that the kids are forced to watch today. So get your kids together and show them a nice bestiality flick from the past. I guarantee they will throw out their Finding Nemo dvds. 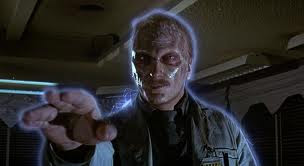