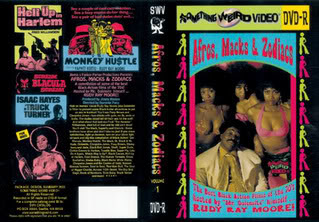 This is the perfect fix for fans of Blaxploitation films and Trailer Junkies. Rudy Ray Moore is our host and although he is getting a bit old. He still looks good in that pimped-out suit and surrounded by pretty black babes including one who looks remarkably like young Pam Grier. Rudy doesn't waste any time talking about the history of Blaxploitation flicks or even anything about the genre. Instead he tells a joke here and there between sets of trailers.
The trailers on this thing are great. We pretty much get every big Blaxploitation movie trailer and then some. This compilation is available through Something Weird Video and the box states Volume 1, insinuating that there would be another to come but just by watching this thing it is obvious that there could never really be a second volume because all the big titles like The Mack, Foxy Brown and Dolemite were already used up. The second volume would be totally obscure movies and I'm sure they had a hard enough time finding the trailers for many of the big titles on this one. Most of the really good trailers on this compilation I already owned or have seen but there was a handful that I have never seen before. Monkey Hustle is one that really grabbed my attention. Jim Kelly also appears on this compilation before the end credits come up and if you ever wondered what it would be like if Black Belt Jones and Dolemite went at it, the answer is on this video. So check it out you poobutt motha fucka!
Posted by Paul Awful at 6:15 PM