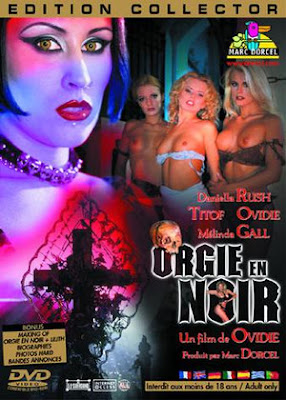 Orgie En Noir also known as Orgy In Black is a hardcore Gothic horror porn from France. It was written and directed by Ovidie a French feminist porno-star who was just making a name for her self in Europe. Ovidie stars in this one as a sort of black magic goddess and she is credited as herself. The movie opens up with two young lovers performing oral sex on each other and slugging vodka from the bottle. The couple are cramped up in the back of a car and decide to go to the local "haunted cemetery" where they will have more room and maybe a few more thrills. The couple find a nice tombstone to lean upon while they indulge in some anal sex. They are struck by lightning and killed right where they sit and with cock in anus. The dead couple are carried away by zombies and brought to Ovidie, where they will awaken as the undead and learn their eternal curse. The couple are forced to wander the cemetery for eternity. Of course the dead lovers refuse to accept their fate and try to escape Ovidie but all this leads to is sex and more sex.
Orgie En Noir is a breath of fresh air in the sense that it tries to follow some what of a plot and that's always a nice thing in the 2000's. Also the fact that its French makes the film slightly more interesting. My DVD had the option to watch it in French with English subtitles or to play it in English. The French language is the way to go. It adds a level of depth to the movie instead of an embracing dubbing. Still Orgie wasn't exactly a great movie. The plot was weak and the sex scenes get repetitive. We get some nice sets and a decent actor or two but overall it was uninteresting and not very memorable. Don't expect the Devil In Miss Jones but I suppose its a slight step up from your average fuck-tape.