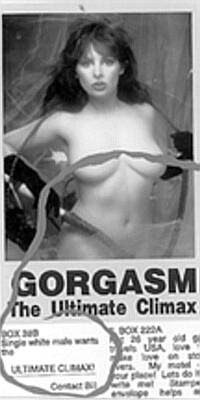 Bottom of the barrel shot on video piece of garbage from Hugh Gallagher who would go onto do Gore Whore (Which I have not seen yet) and produce Jess Franco's Tender Flesh which is a totally sleazy version of The Most Deadly Game, complete with golden showers and close-ups on vagina's.
Well anyway, Gorgasm is Gallagher's first feature and its a pretty rough sit through. The plot is cool but the lack of budget and professionalism really put a hurtin on this one.
Gorgasm is about a desk cop who does a bit of detective work on his own and finds out that latest brash of murders are connected. The murders are being committed by an anonymous woman who runs an article in a smut zine for sexual deviates. She goes by the name of Gorgasm and she offers what she calls "The ultimate climax". The ultimate climax of course being death which she will act out the way her victim chooses. All she asks for in return is all of the money that particular person had in life, after all they wont need it anymore.
Gorgasm has its ups and downs but unfortunately the downs outweigh the ups in this one. Some of the highlights are a sleazy clerk behind the counter of a sleazy adult store who charges 50 cents for you to even enter his store. Then we have a paper editor who surrounds himself with smut. He has filthy posters all over his walls and his mouth is more filthy. Then we get some bare breasts, some transsexual penis on display, a kid wearing a Ted Bundy shirt is decapitated, we get some cool stock footage from a S&M stag film and a cool hand dismemberment scene. The quote of the movie "This place is sleazy. You're nothing but a bunch of perverts".
Then we have the downs. First off its shot on video. The acting is as bad as it can get. Aside from Gorgasm the female cast is pretty damn ugly. One woman looks like she is having a stroke as she butchers her lines. Her mouth and teeth are deformed and if Hugh Gallagher was using family members in this movie its was just cruel of him to force the world to look at this woman. Then we have a saggy titted blond in a black leather outfit and she either has some pretty nasty razor burn going on or a mean case of the herpes. Either way it isn't exactly pleasant to watch her roll around with a weed-whacker, wielding psycho slut. Then we have some shitty subplot with a dummy hanging in a garage (Don't even ask). We are forced to listen to awful 80's hair metal and the main character is smoking cigarettes constantly but as a smoker its annoying to watch this oh so obvious non smoker twirl his cigs around as if it was necessary to the plot. There is moments when the guy holds a cigarette with two hands (it really is horrible). The same guy spins his gun around his finger as if he is the Lone Ranger or something.
Save yourself some time and money, skip Gorgasm and check out George C. Scott's Hardcore. Its a much better film and I feel that is the route Gorgasm was trying to go.
Posted by Paul Awful at 1:24 PM

Email ThisBlogThis!Share to TwitterShare to FacebookShare to Pinterest
Labels: Gorgasm