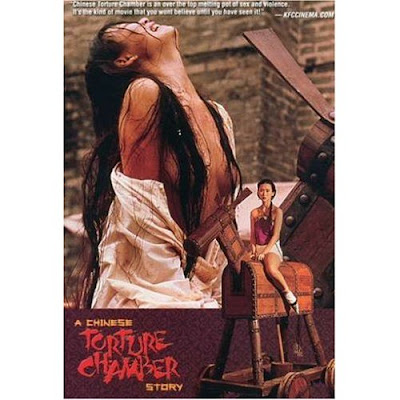 Chinese Torture Chamber Story is a totally off the wall Category III flick. Its anarchy from beginning to end. My VHS print doesn't have the best subtitles but its rare when these Cat. III films are some what coherent.

Its a simple tale of a man and his pretty young servant named Little Cabbage whom are wrongfully tortured and sentenced to death by the court for adultery. The couple were framed by the jealous wife of the servants master. Will little cabbage die a virgin? Will her loyal master be executed in front of his village? I will not give the ending away but what I will say is that the torture scenes are relentless. Some of the tortures that Chinese Torture Chamber offers up are castrations, scalping, breast bondage, canning's, whippings, sharp objects are shoved under finger nails while other finger nails are just ripped off with a pair of pliers. We have people being strung up by their hair and whipped, thumb screwing, giant dildos are put to use, we have people walking across broken glass on their knees, rolling across nails, etc. etc.

Aside from the torture scenes, this movie is extremely perverse. One character has a penis that is so big that it almost touches the floor and he can never have sex with a woman or he will "screw her to death". Well lets just say this guy has some strange masturbation habits and his penis eventually gets so big that it explodes and blood sprays all over the place, leaving his virgin wife soaked with his red dick blood. Then we have all these strange sex toys and devices. We also get a crazy sex scene with a couple that likes it so rough that they break beds and go through walls. Of course they keep screwing all the while. We also get a rape scene involving an invisible man. The scene was done surprisingly well. The editing is perfect and the young rape victim actress is convincing as she flails her arms around and he clothing goes flying. Then we have the most infamous scene. Its almost impossible to explain the madness of this scene, it really does have to be seen to be believed. It involves a sort of kung fu couple who fly through the air and  have what can only be explained as kung-fu-sex. The couple bounce from tree to tree while performing every sexual position on each other. All the while they are yelling at one another and showing off they're new technique. Try to picture a woman yelling at her man that he won't be able to handle or counteract her new move and then they jump up in the air and the woman flips upside down and lands on the mans face in a standing up 69 position. This is the kind of thing that is in store for you when watching A Chinese Torture Chamber Story.
This is probably my favorite Cat. III film to date. There are tons in the genre that I am yet to see, including big titles such as Sex And Zen but this one just has it all going on. Its sleazy, cruel, funny, chaotic and it still makes sense unlike others in the genre that tried to go this rout. I strongly recommend this one to anyone who isn't offended easily and is sick and tired of conventional cinema. Take a chance with this Hong Kong piece of filth! 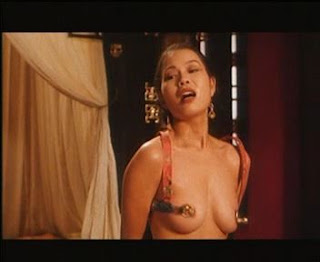