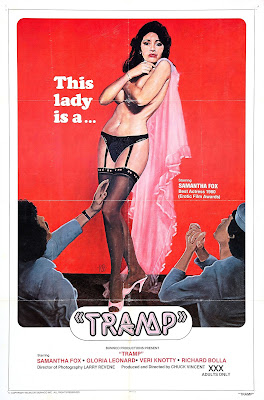 Chuck Vincent, the director of Bon Appetite delivers a much more raunchy and comedic film the same year. This Lady Is A Tramp follows Samantha Fox through her divorce from Robert (Cannibal Holocaust) Kerman. She spills the beans to her lawyer... Actually she tells lie after lie to prove herself innocent and come off as a proper lady but fortunately for us the camera tells the truth and shows her as the Tramp she is and we watch all of her filthy exploits as she climbs the grimy ladder to wealth and fame.

It all starts when she was a young nympho adolescent who seduces her drunken stepfather with a quickie blowjob in a typical pervy jailbait scene from the sickie golden age of adult cinema. Samantha Fox takes turns sucking on her lollipop and her step daddy's cock. Mother walks in after the money shot and chases them around the house with a broom. Naturally the next step is to run away to N.Y.C. and attend some nice films on 42nd Street. Luckily for us Ron (The Rocket) Jeremy is putting on a show in this sleazy fuck-house and we are treated the visual of Jeremy blowing his own whistle. Ron's role is far more interesting and exploitative then that of Bon Appetite and its hard to believe the two films came from the same director.