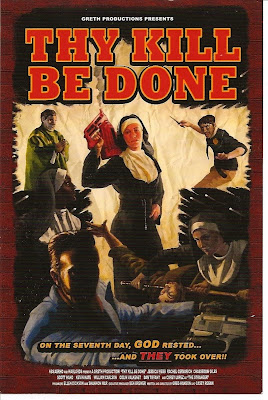 Black Dynamite kicked our ass in 2009 and brought Blaxploitation back to theater goers and before that Black Devil Doll offended all the yuppie, p.c. idiots. Unfortunately as far as exploitation homage/spoof flicks go only Machete would get wide distribution.

In 2010 Greg Hanson dished out his own exploitation flick in a short 16 minute film. Shot on 16mm film Hanson's brand of bad taste comes in the form of a Nunsploitatin flick. A genre that seems to have been forgotten (or was it ignored). Beautifully framed Thy Kill Be Done shows plenty of talent and I personally couldn't help but wish there was a full length version waiting to come out.

The film opens up in church in which a 12 year old boy over doses on heroin before the priest and the entire congregation. The priest hits the streets and confronts a group of drug dealers and a bad-ass 70's style pimp who stabs and kills the preacher with his trusty switchblade. This means only one thing... Vengeance! and the revenge is acted out by three nuns.

We get an amazing Vietnam flashback complete with stock footage of bombs dropping spliced together with machete wielding nuns. We also get a Flying Guillotine homage (Complete with pope-hat hand dismemberment), Nail gun violence, Baseball bat violence (complete with achy-breaky skulls and a ridiculous moment where a bat is shoved down a mans throat), Neck snapping, Gun violence, Machete to the throat and some memorable quotes "Theres a bunch of Nuns down here... Their beating people up".

Its short, its funny and its just plain awesome!

Email ThisBlogThis!Share to TwitterShare to FacebookShare to Pinterest
Labels: Nunsploitation, Shorts, Thy Kill Be Done