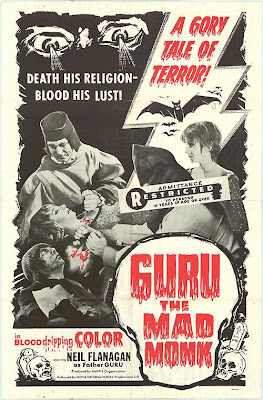 Andy Milligan's name alone usually causes a few different reactions with cult film and horror movie buffs. The most common is probably a cringe because Milligan's movies are out right awful and sometimes unwatchable. The second would probably be laughter. There are people who are partial to the vile works of Mr. Milligan and they just find him and his inadequate style of film making humorous. Every once and a while you get the freak who smiles and shouts out "I love Andy Milligan" while I can see the fascination with the madness of Milligan movies and I myself like to bask in the glory of the sleaziness and gory mayhem of The Ghastly Ones about once a year which is hard for people to believe considering how most people who have seen it once swear they will never watch it again. I however feel almost drawn to that film and feel the need to give it a run every once and a while. Still I don't know if I can consider myself a fan of Andy Milligan but there is definitely a strange power that flows through some of his films. They have an element of weirdness, they are violent, sometimes disturbing and done extremely amateurish. The fact that they are so bad almost makes them more fascinating. 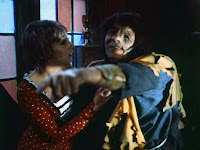 Guru The Mad Monk, not to be mistaken for Rasputin : Mad Monk with Christopher Lee is no exception. The print that I own which is the more popular runs at only 56 minutes and while Guru may be short there is definitely enough odd things going on to fill the average 90 minute movie. There is apparently a 62 minute version out there somewhere which I have not been able to get my hands on yet but would love to.

Guru The Mad Monk is sort of a twisted tale of Romeo And Juliet with serious anti religous undertones. Guru isn't in fact a Monk. He is a Catholic priest who sends accused criminals and sinners on their way to execution. Guru is an evil man with way to much power. He also has multiple personalities and the of course the evil overcomes the good. Guru hangs around with a deformed hunchback who looks a lot like Dee Dee Ramone from the legendary punk band The Ramones. He also hangs out with a female vampire named Olga. Olga and Guru need human blood for their own reasons and they use a young man who works in a prison cemetery to bring them fresh blood.

Guru The Mad Monk offers up quick but graphic scenes of gore and violence that consist of decapitation and eyeball mutilation (complete with nails through the eye sockets). Hands are chopped off with axes and we also have public branding. The gore is so cheesy it makes the average Herschell Gordon Lewis flick look like Cannibal Holocaust but its all done in such a trashy way that a demented gore hound like myself can't help but be pleased.

Check out Guru The Mad Monk for a stab at the Catholic church from Milligan the mad director. 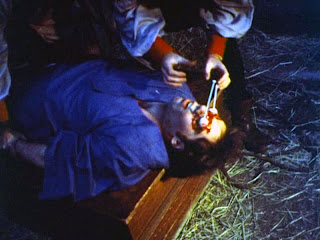 Email ThisBlogThis!Share to TwitterShare to FacebookShare to Pinterest
Labels: Guru The Mad Monk