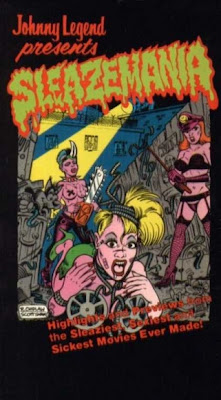 Exploitation and smut historian Johnny Legend (Teenage Cruisers) presents a one hour compilation of sleazy clips and trashy trailers ranging from the 1930's up to the 80's. Mr. Legend doesn't introduce the comp. which is a shame and for the most part Sleazemania is your run of the mill 60 minute time waster of filth and swill right out of the gutter. We do get a couple of great trailers and moments. My personal favorite being a overly sleazy trailer for The Smut Peddlers which I am yet to see but if the film is only a bit as good as its disgusting trailer it will be well worth my time. Another great trailer being the Young Seducers which I also have not scene but the title of the film is proudly pasted over a huge mound of pubic hair on the trailer which I thought was a very classy touch and got a great deal of laughs from me. We also have an incredibly awkward penny arcade stag film with three girls who are about as graceful as a 18 wheeler trying to make its way across two lanes of traffic in new york city.

Sleazemania works as a great filler between two trash films on a double bill or just some background viewing pleasure while consuming alcohol. 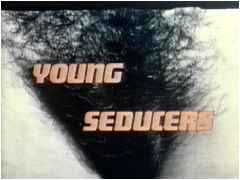