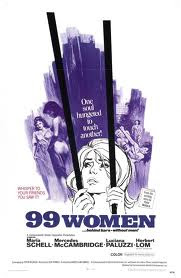 Jesus Franco delivers what looks like a A.I.P. women in prison flick way before Corman or Arkoff were dishing them out. We get a bunch of beauties behind bars who bare their breasts and beat the shit out of each other any chance they get.

Lucky for us the girls a allowed to wear their thigh high stockings in this women's hell hole. Herbert Lom who I remember best as the "impotent" judge and jury in Mark Of The Devil shows up as a sex maniac who likes to torture the nubile prisoners before groping them.

Typical of a Franco film the story is a bit on the weak side but the camera work is great and so are the locations. This thing goes under a million different titles but 99 Women is the most popular of the bunch and although there really isn't 99 of them Franco makes the best of what he has to work with and that of course is sex and violence. In the most memorable scene the girls attack a big python snake with a pocket knife and I say attack because they don't have the decency to kill it as if we were watching a Italian cannibal film. Instead they get staby-staby and cut huge chunks out of the snake and then send it slivering away all bloody and cut to bits. Damn Franco, you are one ruthless fucker.

Not my top pick for a women in prison flick or even a Franco W.I.P. flick for that matter but well worth the watch if not for anything else some nasty rape and snake violence. You might not want to watch it with your vegetarian girlfriend though because animals were definitely harmed during the making of 99 Women. 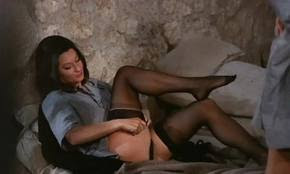