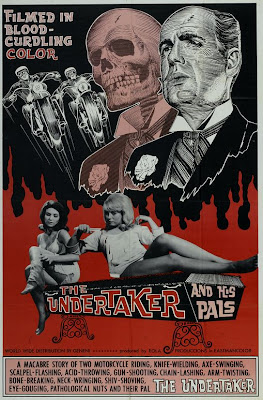 In the tradition of Blood Feast, The Undertaker And His Pals has to be one of the weirdest comedies ever made. Shot on a Ed Wood Jr. budget this hour long gore flick tells the tale of three bikers who ride around on their cycles in search of nubile female victims. They murder, mutilate and dismember the sexy 60's babes and serve the body parts at a shitty hole in the wall restaurant. 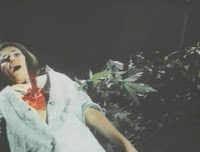 The Undertaker And His Pals never tries to take itself seriously. Instead it tries to be funny but usually fails. However it doesn't fail from being an excessively violent movie with over the top gore.

The great Herschell Gordon Lewis usually gets the credit for being the one American rebel dabbling in this territory but there were others along for the ride. This seldom spoken of movie was also on the drive-in movie circuit at the time. Its hard to believe that someone out there took themselves less serious then Mr. Lewis but this movie is living proof.

Although its real cult following mainly enjoys the blood letting, The Undertaker And His Pals does offer a few laughs, many of which come from scenes that are just to odd to not laugh. One of which being a scene where a girl fires a hand gun off at the vicious biker gang who just ran off with her friends leg. She pulls the trigger and thrusts her hips forward three times. Why she is humping the air is beyond me but it just adds to the strange entity that is The Undertaker And His Pals.

As far as the gore goes, we have a girl impaled on a metal spike, A screwdriver driven through a mans skull, a very nasty scene where a woman is beaten, bloody with a metal chain, which reminded me very much of Lucio Fulci's gory chain violence in Don't Torture A Duckling and even The Beyond. We have a meat cleaver to a mans achy-breaky skull (complete with lots of drippy red stuff), A women is chloroformed and cut open with a scalpel (Complete with entrails fondling), A man is rigged up to a pulley system and lowered into a vat of acid, We get some meat-grinding-fu in true Ted V. Michael's fashion, Motorcycle accidents and some fisticuffs.

Unfortunately we don't have any naked female flesh on display but we do get some 60's underwear and torpedo-tit bras. The film also offers a touch of racism, a touch of sexism and a whole lot of sadism. The Undertake And His Pals is A-O.K. in my book and makes for the perfect film to entertain (or confuse) your friends with. Why this thing is so obscure is beyond me... Fans of this movie should also get a kick out of The Corpse Grinders, Gore Gore Girls and Psychomania which is another flick about a leather clad biker gang of murderous psychopaths. 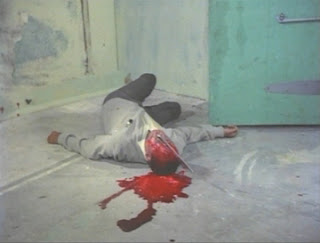 Email ThisBlogThis!Share to TwitterShare to FacebookShare to Pinterest
Labels: Biker Films, Undertaker And His Pals