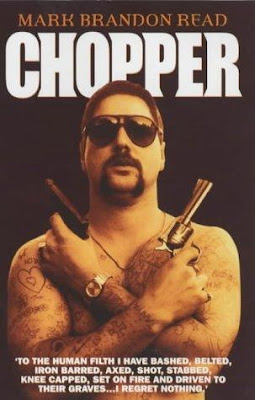 Ever imagine what it would be like to be a total ruthless bad-ass who shoots anybody who fucks with you with out remorse and then reality kicks in and you know you would feel bad and regret it all? That's what we kind of get with Chopper. Chopper is based on the real life Australian criminal Mark (Chopper) Read and was put together from a series of autobiography novels that Chopper Read wrote in prison. Chopper gained his notoriety for sever acts of torture and violence that he unleashed on Australian drug dealers and assorted criminals. However Chopper isn't quite a vigilante. He himself was a criminal who just chose other criminals as his victims.

Many of the scenes in the movie were taken from real events such as Chopper having a fellow prisoner cut both of his ears off so he can avoid an attack from rival gang members. The movie however is really pretty funny. The brutality of it all is sort of numbed down with the comic relief that is thrown in. Chopper is the true definition of a dark comedy.

We are treated to some schizophrenic behaviour that fills the screen with gore and laughs at the same time. In one scene Chopper repeatedly stabs a man in the neck and then apologizes over and over again as the man lay on the floor bleeding to death. This is pretty much the tone of the film. Every time Chopper does something horrible to someone he then apologizes for his actions. In one scene he shoots a man in the gut and then drives him to the hospital.

Some of the other treats that Chopper offers up is a shotgun blast to the face (complete with a slug through the eye), Nasty stabbing scenes (complete with tons of gore), girlfriend beatings, mother beatings, public nudity (complete with swinging dicks) and lots of memorable quotes "Cheers, Big ears".

Its almost impossible to watch this movie and not like the character of Chopper. He is charismatic, funny and of course extremely dangerous. Check it out for a violent fun time. 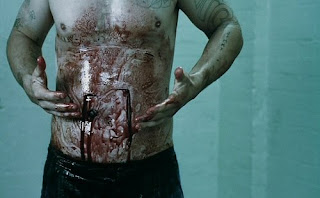