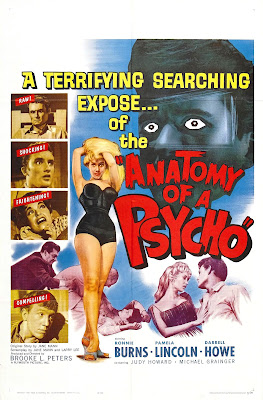 This Juvenile Delinquent flick tells of a hoodlum named Chet who swears revenge on the authority figures who convicted and executed his older brother for murder. I guess the apple doesn't fall far from the tree because Chet's older brother was a delinquent who stole, beat people up and eventually killed a man and younger Chet now carries all those wonderful traits. 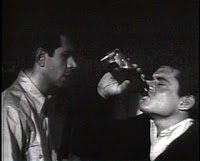 The best part is that Chet and his gang of hoodlums get their vengeance on the sons of the judges, lawyers, police and d.a.'s sons. They never actually physically hurt the ones to blame. Armed with switchblade knives with paper bags over their heads, these delinquents stomp on a kids face in one of the most memorable scenes. Chet also puts another kids face through a mirror and then sets fire to his house. Its a little hard to sympathize with the victims due to the fact that they are all a bunch of rich kids who fathers represent the law but Chet goes over the deep end and kills his friend Moe with a switchblade to the gut. Then he has the audacity to move into Moe's "Shack". That's right Moe lives in a shack. I don't know what the law was on paying taxes, rent or a mortgage on a shack back in 1961 but it seems to be the place to be.

Anatomy Of A Psycho has a cool rockabilly soundtrack, a bit of violence and excessive drinking. Broken bottles makes for knives and cigarettes are used for house fires. This movie could have taken off in a much more thought provoking direction when the father of one of Chet's victims could have had his chance for revenge but instead it sticks to being a good old fashioned cheaply made exploitation flick in the juvenile delinquent genre. "Your brother was a punk, killer and he still is a punk!".

Email ThisBlogThis!Share to TwitterShare to FacebookShare to Pinterest
Labels: Anatomy Of A Psycho, Juvenile Delinquents