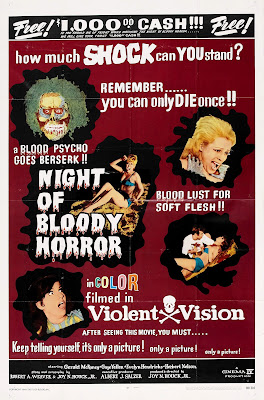 I love the poster art for this movie. First off it was filmed in Violent Vision and secondly it offers $1000.00 to family members who lose a loved one during a screening of this crap-tastic spectacle of cheesy violence. 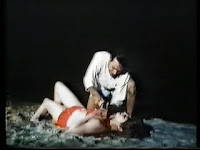 Unfortunately the film itself doesn't match the greatness of its poster but us horror/cult/exploitation fans are used to that by now aren't we. The movie follows a young man with some serious mental health issues. After being released from a mental institution his headaches and nightmares come back ten fold. Luckily for us we know when he is having a mental breakdown with the help of the "Violent Vision". We get a silly looking effect that would be used in tons of these exploitation movies. Its the psychedelic spiral that we all know and love so much. Herschell Gordon Lewis would use the spiral in Something Weird and of course in She Devils On Wheels. Every time the hippie-delic spiral appears on the screen a murder happens and although we don't see the killers face the audience is lead to believe it is our psychopathic main character Wesley. 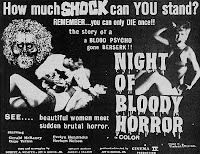 The film makers had some strange ideas on how to cut and edit a film. We get freeze frames for no apparent reason and while it doesn't necessarily hurt the film it doesn't help it either. The colors are soft and faded and the audio levels are a bit to low at moments. The 16mm film is pretty shitty and the framing per second almost comes off as 8mm or something that looks closer to video at times. On the other hand the weapon of choice is a axe and do get some brief but still entertaining gore scenes. A hand is lobbed off at the wrist, a axe is buried into the chest of a bikini clad, blond bimbo, we get an axe to the achy-breaky skull, a spike is driven through a woman's eye in a church confessional, some gun violence and a home collection of dead bodies that would give Ed Gein, Norman Bates and Leather Face an erection.

We also get a hippie-dellic garage rock band that causes quite a bit of violence on the dance floor, a slight bit of tit and shitty twist ending that is seen coming from miles away.

Night Of Bloody Horror isn't the worst hack-em-to-pieces movie ever made but if it played more like a true slasher instead of a mystery movie it would have worked a lot better. Only worth a watch if you get it on a dollar disc. This thing is proudly public domain. Watch William Girdler's Three On A Meathook for a very similar but slightly better time. 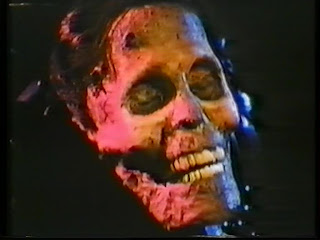