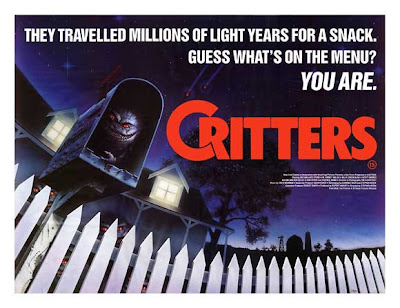 Two years after the success of Gremlins, this silly 80's monster movie would hit theaters and get little kids to scream and parents to laugh. I suppose these midget monster movies from the 80's were one of the few trends that parents and kids could enjoy together horror wise.

These little fur-balls are an alien life form that come to planet earth to wreak havoc and of course snack down on some humans. These guys don't multiply with water but they do get bigger with each meal. They have razor sharp teeth and they shoot little dart like spikes from their bodies. Unfortunately due to the {PG13} rating Critters isn't overly violent or gory. We do get one dead cop, shoulder shredding, kneecap munching and a pretty cool transformation scene that is oddly reminiscent of the melting corpse in the canister from Return Of The Living Dead. This effect is the most gore we get out of the whole movie so enjoy it while it lasts. On the other hand we get a foul mouthed kid, a really shitty new wave band, a church shoot-out and a foul mouthed critter.

The director would go on to do a bunch of awful Hollywood flicks such as Bill And Ted's Excellent Adventure and Don't Tell Mom The Babysitter's Dead. Yuck!!! While I could never bring myself to watch anything else from this director I remain a fan of Critters.

Dee Wallace who plays the mother in The Hills Have Eyes and Cujo once again will play the role of mother. I suppose her character is closer to that of The Hills Have Eyes because she definitely doesn't have the strength that she does in Cujo. She does take out one critter with a shotgun blast but eventually she gets one of those darts to the neck and is pretty useless through the rest of the movie. Wallace being my personal favorite of all mommy-scream-queens I enjoy her presence here.

Grab some beers and some junk food and pig-out with Critters for a Gremlins-esque ripoff from the cheesy 80's. 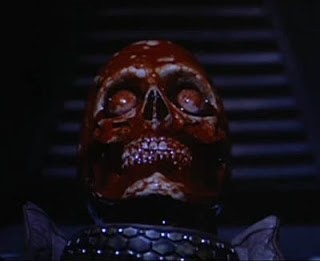