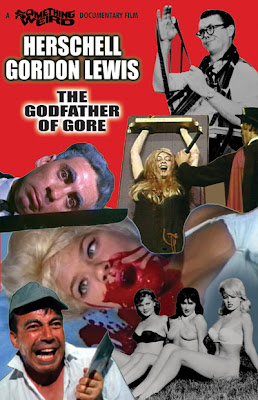 As far as all of the exploitation documentarys to come out in the past couple of years this one and American Grindhouse are my two favorites. Herschell Gordon Lewis being my all time favorite director, it is no wonder that I found this documentary to be so great. Frank Henenlotter (Basket Case, Brain Damage) took on this existing project and re-edits it to what is a 106 minute look into the sleazy world of The Godfather Of Gore.

The documentary starts at the begining in 1959 with The Prime Time and Living Venus. We step further and further into depravity with every title from the great H.G. Lewis. We get discussion on each one and the market value (or devalue) of each film and genre. Lewis of course being a major pioneer in all forms of exploitation, the nudist camp films were amongst the first with Daughter Of The Sun and Natures Playmates but of course it is the darker and meaner stuff that we all know and love the Godfather for. Scum Of The Earth is the one that sort of broke away from the nudie-cutie romps and came in the form of a mean spirted Roughie.

The same year Lewis along with the help of long time partner David F. Friedman would unleash his groundbreaking Blood Feast and introduce grissly gore to film goers. This of course is where the film gets really good. Two Thousand Maniacs, Color Me Blood Red, Gruesome Twosome and Gore Gore Girls all get their screen time and it is great to watch cult favorites talk about them while awesome poster art and bloody images play on the screen behind them. John Waters (Pink Flamingos, Female Trouble) shares some of his Herschell Gordon Lewis collectibles with us and the great exploitation historian Joe Bob Briggs shares his thoughts, feelings and ideas on the works of Mr. Lewis. We even get some never before seen scenes from unreleased Lewis projects.

H.G. Lewis fans need to see this one and trash-film lovers should also check it out Just For The Hell Of It. 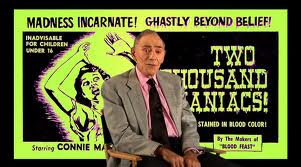