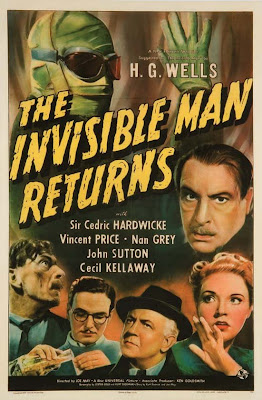 Vincent Price takes on the role of The Invisible Man in one of his first appearances on film. The Invisible Man Returns comes seven years after James Whale's  brilliant original staring Claud Rains and isn't quite as good as the first film but when are they ever? Although Price is recognized more for his distinct voice this wasn't the fact in 1940. Price only being in three films prior he had a lot to live up to in the way of Claud Rains unforgettable vocals. This would be like John Carradine trying to fill Lon Channey's shoes in a sympathetic monster role.

None the less The Invisible Man Returns is a good movie it just lacks in the style and pace of the original. Vincent Price plays a criminal who awaits his execution but escapes with the aid of the invisible concoction that got Rains into so much trouble in 1933. He surly goes mad after a while and becomes violent and irrational. He doesn't send a train full of innocent people crashing off of a bridge but he still has his way with some enemies and of course the police. We have an amazing climax on a coal mining coaster that ends with some gun violence and a man falling to his death in a cart full of coal. We also get a very familiar transformation scene right before the film finishes and this time we are left with a young, pre-mustache, Vincent Price laying in the hospital bed alive. 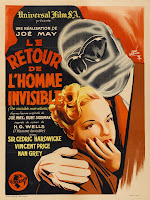 They also change up the Invisible Man's standard bandaged uniform. In one scene he walks around in a scarecrow's clothes and in one of my personal favorite moments he causes some terror hidden behind a gas mask which of course reminded me of My Bloody Valentine but unfortunately Price doesn't go on a murder spree with a pick axe as a weapon of choice.

On the down side the acting is a bit weak this time around and its hard to sympathize with the characters. There is a weak love story going on for a subplot and that isn't very interesting either. We do get a couple of cool gags. One involving the invisible man in a cloud of cigar smoke. We also have a cop who is beaten up, stripped and hog tied which is good for a quick chuckle.

Fans of the original should check this one out. Its not a bad sequel and the invisible character is just to hard to stay away from. 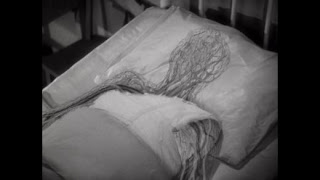