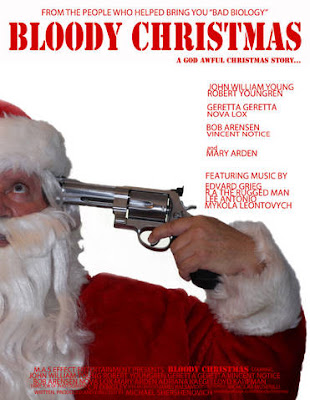 Personally being a big fan of holiday horrors like Halloween, April Fools Day, Happy Birthday To Me etc? I couldn't help but be intrigued by Bloody Christmas, a new film from Long Island film maker Michael Shershenovich. Looking upon the seemingly countless Christmas horror flicks, Black Christmas, Don't Open Till Christmas, Silent Night Deadly Night etc. Bloody Christmas definitely strays from the normal slash-em-up prototype. While not quite playing like a slasher and not necessarily taking itself overly serious Bloody Christmas turns out to be a rather unique experience. Sure it has its moments where the poster art could have claimed it was "Filmed in Slasher-Vision" but at times it almost plays like a Giallo film. Not necessarily in the sense that its a murder mystery but more from the stylish camera work from the director, cinematographer.

One scene that stands out visually is a dream sequence (or should I say nightmare) which was shot on 16mm that gets the audience inside a demented and damaged Santa Clause mind. I couldn't believe a independent film maker was able to pull off such an elaborate and stylized shot. On the down side there were scenes that don't quite hold up in regards to some of the more artistic moments and gives the film a bit of an unbalanced look.

The story follows a down on his luck, public access Santa Clause. He loses his job, his family, his home and eventually his sanity. Lets just say Santa has some bad ideas going on under that red hat of his. Meanwhile a child murdering priest is acting out his own form of vengeance in gods name. Its the oh so familiar "cleanse the world of its filth" tale but the overall message comes off a bit warped and twisted. Its never clear or not if Bloody Christmas is an attack on the church, consumerism or if the writings came from some weirdo Republican who wants to save the ideology of Christmas. Either way, once Santa and the priest cross paths it makes for an entertaining and Bloody Christmas.

Some of the presents that this Christmas flick has to offer is a child massacre filled with gun violence and hand grenades, a suicide in the bathtub that is oddly reminiscent of the opening scene from The Devil In Miss Jones. Mutilation by Christmas ornaments, A sleazy scene in a church involving a voyeuristic female teenager and a very young boy, naked breasts from porn actress Nova Lox. Graphic eye violence that is sure to give the average Lucio Fulci fan an erection, sour-milk-fu (in the vain of Combat Shock), burning corpses, violent broomstick beatings (complete with red stuff) and some pretty funny and memorable quotes "Santa WHYYYYYY??????".

Lloyd (The Toxic Avenger) Kaufman shows up for a cameo as a money hungry priest. We have Geretta Geretta who I remember best as the prostitute with exploding pimples in Demons as the grieving mother of a dead child. Steve Montague (Roadhouse, (Blitzkrieg : Escape From Stalag 69) plays Santa Clause and personal friend of mine and indie actor Robert Youngren takes on the role as the kiddie-killer-priest.

Fans of low brow independent cinema might want to check this one out. While it has its flaws it is certainly an entertaining work of art and mayhem that delivers the goods, from new and talented upcoming film makers. 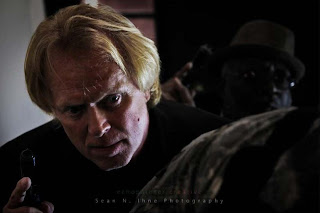