This thing is slightly upscale compared to most of the porno-spoofs that come out today. The acting is better then normal or at least from some of the actors and its obvious that the crew really did their homework on Stanley Kubrick's classic A Clockwork Orange. The wardrobe looks great and the slight play on words from the unique style of writing is brilliant. "I have a rather intolerable pain in the gashy-washy Mrs."

A Clockwork Orange being one of the biggest cult films ever made it is obvious that this pornographic version is bound to have a following of its own. The real downside to it all is the destruction of the musical soundtrack. Where in the original film the music adds so much to the visuals on the screen, the score in the pornographic version almost hurts the film. The electronic 90's music is annoying and amateurish and just doesn't suit the movie at all. Aside from the shitty score, the movie was shot on 35mm and doesn't look half bad. Of course it doesn't hold that gritty feel of the 70's and 80's porn but still looks better then the digital garbage they release today. Another problem with the film is yet again another reflection of the times. The girls all look so plastic. That of course being the look of the 90's but was always quite unattractive to me. Blond babes filled with silicone. They look great dressed up in their droogy gear but once they shed the clothes it really becomes a turn off.

Worth owning as a novelty if nothing else. 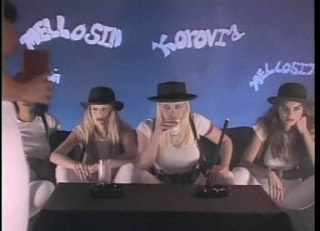