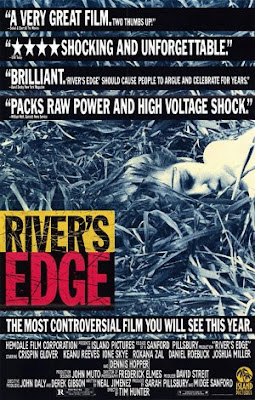 Dennis Hopper was a very busy man in 1986. He played a vengeful, chainsaw wielding, cowboy in Texas Chainsaw Massacre Part 2 and a dangerous, gas huffing, villain in Blue Velvet but he would also take on the role as Feck in Rivers Edge, as a recluse, lunatic, murderer who has a strange connection to his pistol and his blow-up doll.

Besides Hopper is cult favorite, character actor, Crispin Glover. Glover plays a high school burn-out and delivers plenty of strange stylized acting that we all know him for. Glover is sort of the self proclaimed leader of the burn-outs. For some odd reason his clan of weed smoking, metal-head, morons listen to everything he says.

When one of Glovers close friends confesses to the murder of another friend and classmate he stops at no cost to protect his friend. The only problem is news spreads fast amongst these stoners and one of them doesn't feel like going along with Glover.

This movie stured up a bit of controversy upon its release due to its strange and intense subject matter. It portrays the children of the 80's as not only useless but dangerous in their nihilistic habitat. Morals, feelings and conscience are few and far between with these mixed up kids and it seems the only things they care about is sex, drugs and of course rock & roll. Except for the character of Glover who becomes obsessed with the death of his friend but he becomes obsessed with the idea of hiding the murderer instead of turning him in. Perhaps the creepiest part of Rivers Edge comes from a 8 year old character who witness's the crimes that his older brother is involved with and eagerly follows in his footsteps but his young fragile mind is more warped and dangerous then that of the older high school kids. The 8 year old does drugs, stays out all night, steals cars, robs houses, beats up the elderly, and is working his way up to murder.

The Rivers Edge is thought provoking, humorous, sad and at times creepy. It leaves the viewer questioning his own morals and the rest of humanity. Naturally its a cult classic.