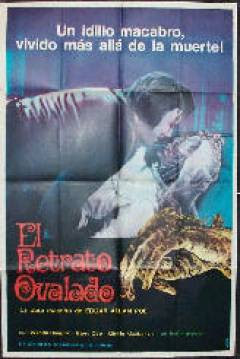 If I can't punch the actress, I will have to punch myself for buying this shitty movie. This American/Mexican production has to be one of the worst fucking movies I have seen in a while. The Oval Portrait or One Minute Before Death takes from the writings of Edgar Allan Poe and mangles it with wretched visuals and over all inept film making.

A mother and daughter inherit a mansion which is haunted by the ghost of the former resident. The daughter becomes possessed and runs around in an embarrassing manner.

First off the daughter is played by a 50 year old woman and no amount of Botox can help this wrinkled up old bag. Its annoying as hell watching this old bat run around and pretending to be a child. I don't care if she was the worlds greatest actress which she is absolutely not and had the worlds greatest makeup artists making her up. We still wouldn't be fooled. Then we get some really shitty ghost effects and horrible acting all around. The voice over dubbing is horrendous and the plot is totally boring. Luckily for us we have a necrophilia scene (complete with corpse slow-dancing). We also get a tid bit of blood but nowhere near enough to save this vile piece of crap.

Don't ever watch this movie! 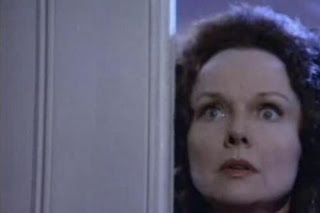