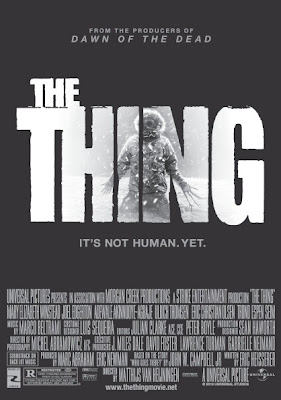 John Carpenters remake of The Thing From Another World is possibly the best remake in cinema history. He offered a much more graphic take on the 50's monster movie with groundbreaking special effects for a modern audience in 1982. In theory I suppose The Thing 2011 had the same responsibility to deliver the computer graphics to the audience of today. Personally not being a fan of CGI at all I had very low expectations for this movie and knew there was no way possible they could have out done John Carpenters 82 remake which still stands up today as far as the effects go. In the 82 flick the computer scenes seem a bit dated by todays standards but the gore is still outrageously affective as it was the day it was released.

The 2011 take on the other hand will not become the timeless classic that Carpenter directed and the reason being, character development... Where is it? The characters in the new movie all seem worthless. They don't offer anything there for their lives are meaningless. This keeps the audience in a certain mind frame... Bring on the next gore scene. In that sense I suppose The Thing (2011) wasn't horrible. The CGI looked good for what it is (At least at certain times). Half of the effects looked like total shit and there was one scene in the space ship that was just an embarrassment but we also had some cool double headed monster action and stomachs that split open with other monstrous surprises that pop out.

The film makers did their best to hold the mood and creepy pace of Carpenters film and succeeded to a certain level but failed miserably when it came to screen writing. The blood test scene in Carpenter's version is one of the most tense scenes in horror history. The characters and the audience alike await the results of the blood test and then before you can blink, Bam! in your face all out monster mayhem complete with gory catastrophe and death. This time around they check for fillings in the mouths of the suspected infected. Fucking fillings? They have to be kidding me.

I will admit The Thing (2011) is probably one of the better remakes to come out but it just doesn't meet the high expectations and standards of a true American classic like The Thing (1982). 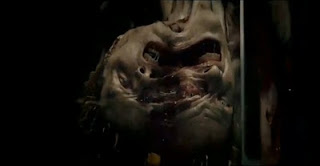 Email ThisBlogThis!Share to TwitterShare to FacebookShare to Pinterest
Labels: Monster Movies, The Thing (2011)