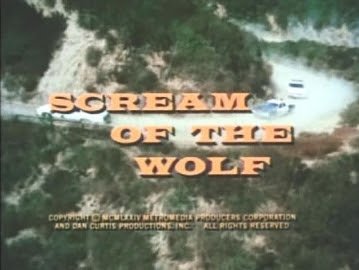 There are a lot of bad Werewolf movies out there, The Werewolf Of Washington, My Mom's A Werewolf, The Howling Part 7 : New Moon Rising. There are so many bad ones that its hard to pick the worst. I'm not really sure if Scream Of The Wolf is any worse then the others mentioned above but none the less its pretty shitty.

This posterless, 70's made for television piece of crap is nothing more then a time waster and a bad choice at that. I suppose if I were flipping through the channels in 1974 and this one happened to be on, it might be slightly more interesting then whatever else might be on but that is still a stretch.

Scream Of The Wolf stars Leslie Nielsen look alike, Peter Graves. Which is actually kind of funny cause the two worked together in Airplane. Anyway, Peter Graves plays a author/hunter who is trying to track down the beast that has been killing the local town's folk and leaving very strange tracks. He calls upon his fellow hunting buddy Byron, who has some very weird, philosophical ideas on human life. When Byron refuses to help, Peter Graves and the locals start tooling with the idea that perhaps Byron is a Werewolf.

Due to the fact that this is a made for t.v. movie, we don't get to see any of the murders but the least they could have done is show the monster. Well sorry to break it to ya but they don't! Reason being... There is no monster. Byron is just a sick fucker living out his philosophy. He uses a pet wolf with a thirst for human blood and built some sort of a contraption that leaves abnormal footprints in order to create mass hysteria.

All in all we have a very predictable and weak plot but the end is slightly entertaining. It involves a showdown between Peter Graves and Byron. Oh and the wolf of course. Scream Of The Wolf is a ripoff as far as Werewolf flicks go and you wouldn't be missing much by skipping this one all together. 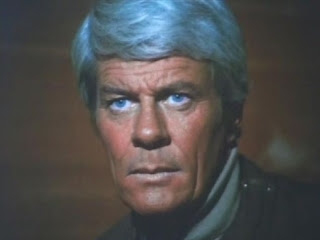 Email ThisBlogThis!Share to TwitterShare to FacebookShare to Pinterest
Labels: Hunter (The), Scream Of The Wolf, Werewolf Flicks