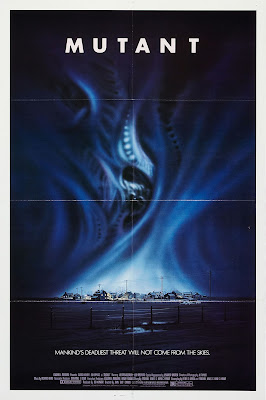 Talk about boring poster art... Chock full of plot holes and laughable action scenes, Mutant falls somewhere between a zombie flick and a epidemic movie, similar to today's 28 Days Later. Of course this low budget, campy, 80's flick doesn't play like the polished 28 Days Later, it plays more like The Children (1980) and I couldn't help but see similarities between the two films. Mainly due to the virus being passed through the zombies hands instead of saliva.

Two brothers from the big city decide to get away from the rat race and head down south for some rest and relaxation. Instead they are greeted by hostile rednecks in a pick up truck, who throw everything from beer bottles to truck tires from the bed of the pickup at the outsiders. The hillbilly's run the brothers off the road, sending their little sports car off a bridge and into a lake. The brothers eventually make their way to the local pub, where they have yet another altercation with the not so tolerant locals.

Bo Hopkins, who I remember best from The Wild Bunch as the crazy son of a bitch who shoots the hostages and says "Well kiss my sisters black cats ass", shows up as the drunken sheriff and breaks up the fight. He sets the boys up with a place to stay and tells them to leave town as soon as their car is fixed which never happens due to a viral epidemic caused by (Yes you guessed it) toxic waste.

The small town hicks are dropping like flies, only to get up and walk amongst the dead as pasty faced zombies with slits in the palm of their hands that leak a yellow substance that looks identical to the blood in the Phantasm movies. The simple makeup is effective and fun and we also get a bunch of 80's latex-bubble-skin special effects. Unfortunately Mutant doesn't offer any gory head explossions but we do have our fair share of dead children, which is always a plus. In one of the best scenes a hot school teacher is trapped in a elementary schools bathroom stall while undead, zombie children try their best to get at her.

Mutant doesn't offer any nudity or explicit gore but for a under the radar zombie flick it serves as a decent time passer. Dead children, angry rednecks, bad acting and zombies with deadly hands. Check it out for something different. 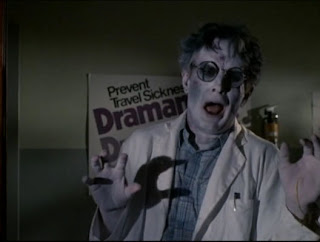