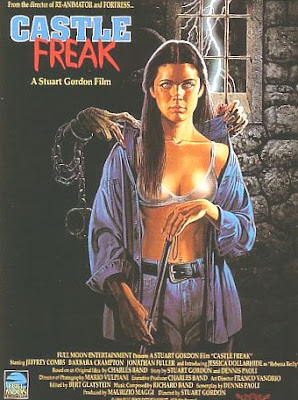 Director Stuart Gordon takes gross to a new level with this one. Ten years after his cult classic Re-Animator, he unleashes this twisted tale of a deformed freak who breaks free of his chains and his cell in the cellar of a castle where he was whipped and tortured. Now its the freaks turn to dish out the pain and take his own form of vengeance. 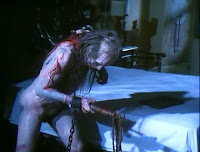 Castle Freak isn't a monster movie but the freak is so grotesque that its hard to remember that he isn't a monster. His bones protrude through his skinny, decrepit body, his face is torn from excessive beatings. Even his penis has been cut off and the camera shows everything in great detail. The fact that the freak roams around naked through the majority of his screen time is disturbing enough. Throw in some swinging testicles and a severed, nub-penis and it makes for a real dry-heaver.

Stuart Gordon uses Re-Animator veterans for this one. Jeffrey Combs and Barbara Crampton (Chopping Mall) play husband and wife in a very dysfunctional family. Combs is a drunk who killed their son and blinded their daughter in a drunk driving car accident. The family inherits the castle and will fight for their life with the freak as the obstacle. 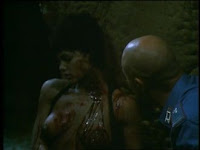 In one of the most memorable scenes a prostitute has her breast bitten off and Stuart Gordon tries to out do his controversial oral sex scene from Re-Animator. Instead of a severed, talking head the audience is treated to the disturbing visual of freak munching away at the prostitutes vagina as she bleeds to death.

A cat is killed and eaten, A thumb is broken and bitten off, A woman is beaten to death with a chain, we get stabbings, strangulation and dead cops on display. Unfortunately Barbara Crampton doesn't show off any boobage and Castle Freak may be Crampton's most un-sexy role ever. She wears suit jackets through most of the film and she plays a total bitch.

Surprisingly Castle Freak is released through Full Moon which sucks 99 percent of the time. Castle Freak is by far the best movie in their catalog and can't be compared with the other crap released by the production team. Castle Freak also has a pretty big following and name for its self and I never understood how this movie got as big as it did. Its not just gore-hounds and horror fanatics who watch this one. I remember this movie being sort of trendy in high school which even further confuses me. Trendy or not Castle Freak deserves the attention that it has gotten over the years. Its a perfect blend of classic Gothic horror and sleazy, vile Euro-trash. So chain yourself in front of the screen and torture yourself with disgusting visuals from Castle Freak. Yuck! 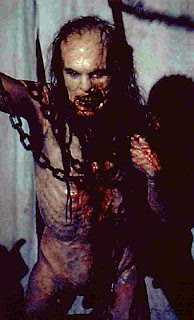