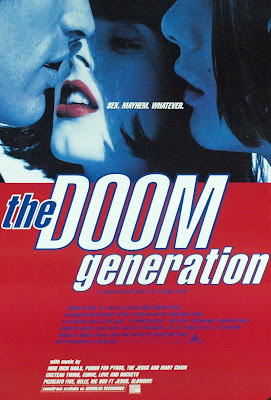 Doom Generation is cheesy, mall, goth-kid delight. Its got Nine Inch Nails on the soundtracks and glorifies the leather-clad, gloomy directionless youth the max. As much as I like to put this movie down I can't help but like many aspects of it at the same time.

Sexy Rose McGowan (Grindhouse : Planet Terror) plays Amy Blue, an alienated speed-freak. James Duval (May) plays Jordan White, a brain-dead teenager with a soft side. Amy and Jordan are complete outcasts and feel smothered by a world they don't fit into. Their life takes a drastic change when they meet Xavier Red, another young waste with a much more violent and sinister side. Together the three misfits take to the road and leave a trail of dead bodies as they try to escape their own private hell.

Personally I feel the movie is a bit self indulgent and tries to be a little deeper then it really is but at the same time its chock full of senseless sex and violence. Rose McGowan looks great and puts her sexy naked body on display. At the same time there is a lot of homosexual undertones running through this movie and undertones might be an understatement. We have some really trippy sets that come to life with the help from the lighting department. We have decapitations (complete with talking severed heads), castration by garden sheers, A arm is blown off with a shotgun, A man is stabbed in the penis. We also have a psychotic Nazi gang, Orgies and some truly funny moments.

If only the characters weren't three lame goth kids, Doom Generation would have probably had a bigger appeal to a larger audience but it is what it is. "What ever" 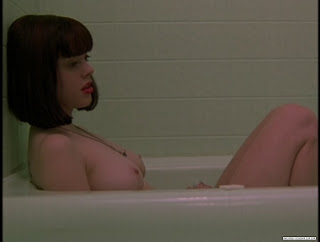