An American Werewolf In London (1981) 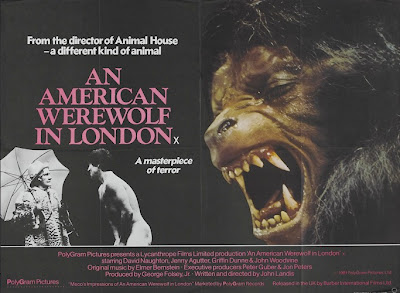 American Werewolf In London is one of the best Werewolf movies ever made. The Howling would come out the same year and both films have about an equal amount of notoriety. Unlike Joe Dante's more serious movie, John Landis throws much more humor into his werewolf movie.

Landis blends horror and comedy perfectly with this one. Between the ground breaking special effects with the Werewolf transformation and the gory bloodletting the movie stays fresh all the way through. The comedy never takes away from the story and just when you might be getting tired of laughing a decapitated head might roll across the screen.

Like the title says, two Americans who are back-packing across Europe get attacked by a Werewolf in England. One of them is killed and the other terrorizes London.

American Werewolf In London offers up a Nazi Werewolf home invasion, complete with child murder and splattery throat slashing, mangled zombies (not the flesh-eating type) who "walk the earth in limbo as the undead", a porno theater massacre, male and female nudity, decapitation, dismemberment, punk rockers, and plenty of homage to Lon Chaney's The Wolfman. "Even a man who is pure in heart and says his prayers by night, may become a wolf when the wolf bane blooms and the Autumn moon is bright". Rick from the Young Ones shows up and has a pint in a pub scene and we also get a decent soundtrack.

I watched this recently at a local screening and it was nice to hear audience members shout out "Fuck CGI during the transformation scene. American Werewolf is a true classic and has stood the test of time. This is more then we will be able to say for movies like Underworld. 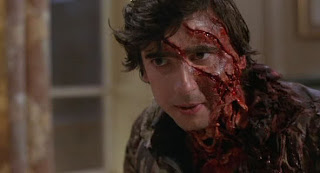