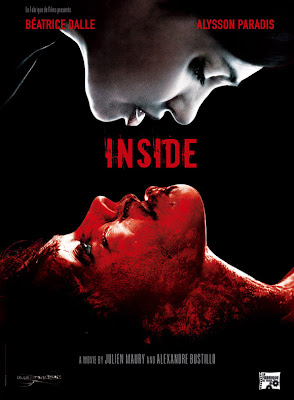 For some reason people like to relate this movie to Martyrs which really doesn't make any sense at all other then the fact that they are both French and they are both extremely disturbing. Inside is one of the most disturbing movies to come out in recent history. The subject matter is disgusting and the bloodletting is relentless.

Being lucky enough to see this gory spectacle in a theater and witness the audiences reaction was a treat all in its own. You could almost feel people cringe behind you while heads explode and hands are impaled by a pair of scissors. Personally being a bit of a gore-hound and a big fan of this movie I myself can't help but get a bit squeamish during some of the nastier scenes. I just wish that Herschell Gordon Lewis could have been there in the audience with us and maybe hear his feelings on how far gore has come since the days of Blood Feast and Color Me Blood Red. I bet the godfather of gore himself would squirm in his seat. 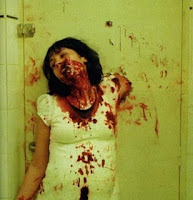 I suppose the only downside to this movie is that the story is a bit shallow but it really doesn't hurt the over all experience because the acting is really pretty good, especially from our female lead and the villain as well. The camera work is better then your average Hollywood flick and the score is simple but yet very effective.

Inside tells the tale of a widowed woman who is trapped in a house with a psycho womb-raider. For those of you who don't know what a womb-raider is, its someone who cuts fetus's out of pregnant women's bodies and steals the baby. The womb-raider in this situation uses a pair of scissors as a weapon of choice and goddammit she does some awful things with those scissors.

I have no idea how many gallons of blood was actually used for this movie but it must have been up there with Evil Dead and Dead Alive but unlike those films, Inside doesn't ever try to be humorous. Eyeballs are poked out, stomachs are cut open, blood spurts from neck wounds, blood pours down the stairs in a really nasty penis stabbing, a cat has its neck broken, we get achy-breaky skulls complete with flying toaster to the cranium, faces are burnt up with aerosol can to open flame. For me the most memorable and nastiest scene of them all involves a self tracheotomy (complete with ductape to the wound). Gross!

Anybody who likes splatter films needs to see this movie. They don't get much sicker then this! 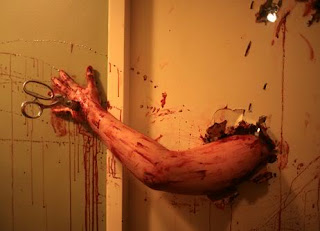 Email ThisBlogThis!Share to TwitterShare to FacebookShare to Pinterest
Labels: Inside.