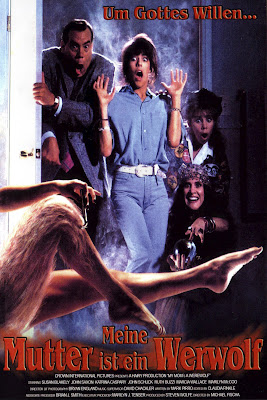 Nothing of any value going on here, unless of course you like really shitty comedies from the 80's that dabble in the horror genre.

Mrs. Shaber is a married woman with a pretty daughter but hubby just isn't paying any attention to here anymore. I don't think I can blame him because I wish I could ignore her myself. She has an overbite, her cheeks hang low (and this is before the Werewolf transformation) plus she is a terrible actress. Anyway, Mrs. Shaber's life is about to take a drastic change when she meets a handsome werewolf named Harry Thropen (Hairy Lycanthrope... Get it?) played by the one and only John Saxon (Tenebre, The Glove, Black Christmas, Hands Of Steele). For the life of me I can not figure out why John Saxon is in this piece of shit and I certainly can't figure out why he was casted as the mysterious, handsome one. Well, anyway Mr. Thropen seduces Mrs. Shaber with the help of a bit of hypnotism and bites her toes in some raunchy foot fetish action. Mrs. Shaber runs off and surprises her family for the next full moon.

Aside from John Saxon, Forrest J. Ackerman (Creator of Famous Monsters magazine) appears in a horror convention. Ackerman has no lines but its great to see his face in a moving crowd. So what the movie offers is MR. Saxon, Mr. Ackerman, some nerdy rants about horror movies, horror movie posters such as Prime Evil and Galaxina, and Sam The Sham & The Pharaohs are on the soundtrack. Other then that My Mom's A Werewolf is a total utter piece of shit that needs to be avoided at all costs. Its not funny, its not witty, its not creepy, its not gory, its not sexy, its just there collecting dust on my shelf and as far as werewolf comedies go, American Werewolf In London will always be number one. I'm pretty sure this one was just cashing in on the Monster Squad fad or was it an epidemic? 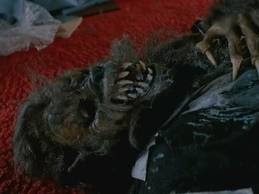