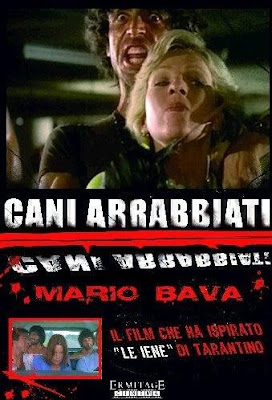 Four criminals one of which being George (Anthropoghagus) Eastman take on a robbery at a local pharmacy. Things go violently wrong and one of the criminals is shot down. The three survivors kill a few Innocent civilians during their escape and take three hostages.

Rabid Dogs takes place almost entirely inside a car and its a game of cat and mouse between the hostages, the cops and the bad guys. The fact that Bava is able to make a highly interesting movie from the restrictions of a car puts the man (in my opinion) in the ranks of Hitchcock and reminds me a lot of Rope.

The hostages consist of one man, one woman and one sick child. The fact that a young kid is thrown into the violent mix makes Rabid Dogs that much more tense.

As the minutes run by the criminal become more vicious. We have a scene reminiscent of the "Piss your pants" scene from Last House On The Left and we have our fair share of brutality. One of the criminals uses a switchblade as a weapon of choice. He stabs a man to death, slashes another woman's throat and sticks the blade through another females neck. George Eastman gets a bit drunk from some excessive J&B guzzling and gets a bit rapey with his female hostage. This comes to a end when Eastman is shot in the head and left in a zombified state. "He's more dead then alive. Let him croak in peace". Eastman hangs on a lot longer then expected and just makes Rabid Dogs all the more intense. We get a nice amount of gun violence and a twist ending that I didn't see coming.

Rabid Dogs also known as Kidnapped was left unfinished when Mario Bava died and the slack was picked up by his son Lamberto Bava but for once in history the shorter version is better. The "full uncut" version is nothing more then a few added scenes from Lamberto but they only end up hurting the film in its finished product. To keep a nice runtime some of the scenes were cut down from the original Bava shoot. It just so happens they were excellent scenes of violence and style. Skip the Kidnapped version and stick with Rabid Dogs. You wont be disappointed. Fans of this movie should be sure to check out Hitch-Hike 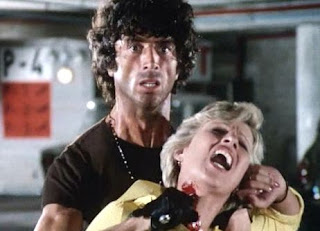