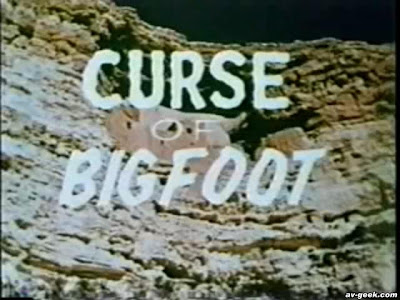 What a mess of a movie. Curse Of Bigfoot is the product of a 60's throw away film called Teenagers Battle The Thing with added footage and added confusion. Some how this thing aired frequently on television in the 70's which is even more baffling then the movie it self.

Curse Of Bigfoot opens with a zombie looking monster stalking a women in the woods. As bad as it is, Curse Of Bigfoot gives off the impression that this might be a 70's sickie in the beginning. Well, sick it is but not in the bloody, nasty, disgusting kind of way. It's sick in the so bad it can't be ignored kind of way. Similar to the movies of Ed Wood (Plan 9 From Outer Space) and Al Adamson (Satans Sadists). The decaying faced zombie quickly goes away for good when a school teacher shuts the projector off and gives a speech about 50's and 60's monster movies to his students. "These movies may seem corny today" Then the teacher goes on to talk about Bigfoot or the Yeti or the Abominable Snowman.

Curse Of Bigfoot plays more like a National Geographic movie or an educational film then a horror movie which makes it all the more bizarre. Its good to know that teachers in the 70's dealt in fact with important subjects on Bigfoot and other monsters.

Next a weirdo scientist stands before the classroom and tells his bizarre, incoherent story of when he met Bigfoot in a giant flashback that will eat up the remainder of the runtime. This footage was taken from the earlier Teenagers Battle The Thing and guess what... The thing isn't even a Bigfoot. It's a giant fucking mummy from "hundreds of thousands years ago". It looks more like a monster out of a John Ashly movie like Beast Of Blood or something.

Through the rest of the movie the teenagers pretty much walk around aimlessly in the woods while a driving musical score blares as if something might actually happen. Curse Of Bigfoot comes to what would be recognized as a climax when the kids set the Bigfoot/Mummy on fire.

They really don't get much worse then this. Nothing interesting going on at all except when we see the monster and on top of all that it just doesn't make any fucking sense. Still Curse Of Bigfoot is as weird as they come and definitely deserves points for being a movie from mars. Its best viewed with multiple friends and alcohol but for a much sleazier Bigfoot experience check out the great Shriek Of The Mutilated. It even makes sense. Sort of... 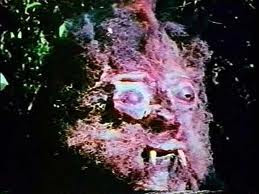