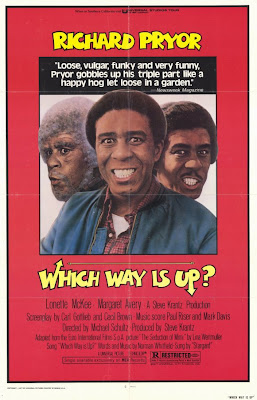 For some reason people recognize this movie as a blaxploitation movie but I don't view this thing as a exploitation film at all. There isn't any exploitative material in here at all.

Richard Pryor plays three characters in this one. The first being a lying, cheating fuck-up named Leroy. The second being a foul mouthed bummy old man named Rufus and the third being a pervy priest who has more children then Jesus himself.

Pryor is funny as usual especialy while playing the old man. He over acts the character of Leroy a bit and at times and Leroy's character almost comes off like a typical scared black man is a racist 30's horror film.

In one of the best bits, Leroy tries to kill his wife after he finds out that she cheated on him with the priest and is pregnant with the preachers kid. The tables are turned when his wife learns that Leroy had been shacking up with another girl on the other side of town. They chase each other around the kitchen with kitchen knives and meat cleaver in what might be the funniest scene of domestic violence in cinematic history. In a much more awkward scene Pryor is chained to a bed, whipped against his will and has a vibrator shoved up his ass.

Which Way Is Up is a comedy but tries to hold somewhat of a social commentary which I didn't feel came off very clear or effectively. In the following year Pryor would go on to do a much more serious and political movie called Blue Collar. Blue Collar and Which Way Is  Up share a very similar subject matter but the two films couldn't be more different.

Check it out for some good old 70's, jive jargon and some general silliness. 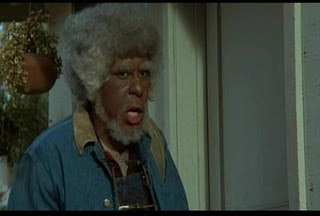 Email ThisBlogThis!Share to TwitterShare to FacebookShare to Pinterest
Labels: Which Way Is Up