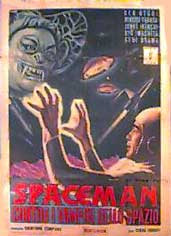 Apparently The Evil Brain From Outer Space is a reedited version of a Japanese television series staring the Japanese super  hero Super Giant or in the American version Starman.

Starman or Super Giant is played by Ken Utsui (A Super Giant veteran) and he is as ridiculous as they come. If you think the Mexican Lucha Libre movies are silly just wait till you get your hands on a copy of this movie from mars. Starman doesn't wear his cape on his back. Instead he has two miniature capes, one under each arm. He also has a stupid looking antenna on his forehead and his martial arts is atrocious. In other words The Evil Brain From Outer Space is fucking awesome! Well at least it can be if you have a sense of humor. This is pure Mystery Science Theater 3000 material and although I am not sure if MST3K has ever taken a stab at this one, it would be the perfect candidate. 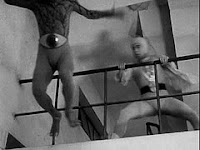 Starman returns to planet earth to save mankind from a (Yes you guessed it) Evil Brain From Outer Space that controls weird looking monsters on a mission to kill all of the world leaders and destroy man once and for all. The unique monsters really add a whole other level to the madness that is The Evil Brain From Outer Space. One of them looks like a sort of rat in a spandex suit. He comes complete with long finger nails and giant teeth. According to the shitty voice over just one swipe from those claws can leave a man dead. Then we have this weird witchy monster with crazy eyebrows in a sort of Geisha girl dress. There is also a whole army of spandex wearing villains who give something very similar to the Nazi salute. Starman drops these clowns like flies but he has a much harder time with the rat-monster.

The Evil Brain From Outer Space also offers up a bit of blood in a heist scene in which a Innocent woman is stabbed in the neck. The bad guys also chase down two little kids with some child murder in mind but the children get away with the help of starman. We get a bunch of secret doors and a scientist who walks around with a parrot on his shoulder.

This one will either put you to sleep or it will have you laughing your ass off. I am personally happy to have my first instalment in the Super Giant genre added to my collection. If you can bear through Asian man-package poking through dumb spandex costumes and badly dubbed over voices I would check this one out some time. 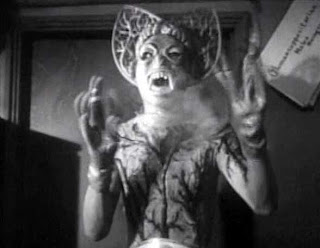