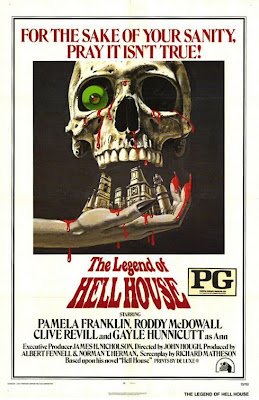 Four people researching paranormal activity (not the movie) join up and visit an old haunted mansion known as Hell House with the mission to prove whether or not there is in fact any haunting's. Amongst the researchers is a scientist, his useless yet sexy wife, a religious medium, and Roddy McDowall who is the only survivor of a previous visit to Hell House and McDowall does a great job explaining the evils of the house "Drug addiction, alcoholism, sadism, bestiality, mutilation, murder, vampirism, necrophilia, cannibalism, not to mention a gamut of sexual goodies. Shall I go on?".

Its your typical ghosts and hauntings flick with creaky doors that open and close on there own and random objects fly from tables for no apparent reason, except this one offers a couple of really affective moments. The best being a all out ghost attack on our logical thinking scientist. He is cut by flying glass and thrown from his seat at the dinner table, nearly burnt to a crisp by a fireplace that turns into a sort of flame thrower and nearly crushed by a falling chandelier. Legend Of Hell House also offers up a scene in which a possessed cat goes ape-shit and claws up our religious fanatic. Death by falling crucifix and a legless Michael Gough (Crucible Of Horror, The Skull) who I remember best as the psycho who drives around and decapitates his victims in Horror Hospital.

Roddy McDowall is great as usual, playing yet again the sensitive, soft spoken, sympathetic character but this time around he becomes possessed and goes into violent, over acted convulsions. He also goes to war with the spirits of the house in a final showdown. We also have the privilege of seeing McDowall smack around a naked nympho.

One of the better of 70's haunted house flicks and worth a watch for fans of these types of horror flicks. Aside from McDowall all the other actors do a good job as well. Legend Of Hell House is a all around good film, with nice camera work and excellent framing. However, seeing it for the first time on the big screen I couldn't help but notice the extreme close-ups on the actors. Especially side profiles. So if you have some kind of weird nose fetish you might want to check this one out as well. 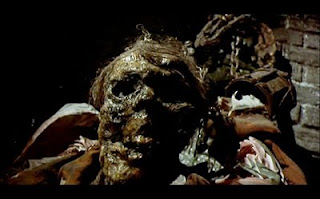 Email ThisBlogThis!Share to TwitterShare to FacebookShare to Pinterest
Labels: Hauntings And Ghosts, Legend Of Hell House