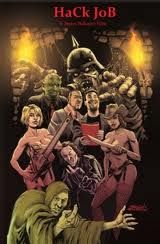 Long Island filmmaker James Balsamo writes, produces and directs his first full length feature. Mind you that Hack Job is as indie as independent gets Balsamo makes the best of his lack of money in true Troma fashion.

What we have is a anthology film filled with Nazi mummies, killer brains from outer space (Not to be mistaken for The Evil Brain From Outer Space) and an extremely disjointed tale (that from what I can gather) tells the story of a man on a mission to destroy religion. This is at least until he meets Jesus... and Jesus just so happens to be a Japanese man who dances in gardens (Don't ask).

If polished budget movies is your thing you would probably want to stay far, far away from this one but if you like goofy gore flicks similar to the modern works of Troma Studios you might want to pick this thing up. Hack Job offers up bare breasts from young, swanky bitches, head explosions, eye-popping mayhem and naked Nazi sluts. We even have a scene where a spinal cord is pulled from a mans eye socket. "Is that even possible". As far as the cast goes we have members of Gwar fighting off a mutant brain with crazy tentacles, Lynn Lowry from classics like I Drink Your Blood and They Came From Within. We also get Lloyd Kaufman himself (Toxic Avenger) who goes on a rant about shitty film making and bad choice in titles such as Hack Job. Kaufman offers one of the funniest bits in a scene where he plays a foul mouthed yamaka wearing Jew. Scream Queen Debbie Rochon (Santa Claws, Terror Firmer) also shows up for a rather pointless scene. We also get some other Long Island cinemaniacs like Keith Crocker (Bloody Ape, Blitzkrieg : Escape From Stalag 69), Robert Youngren and Michael Shershenovich (Bloody Christmas).

The first two stories move along at a somewhat coherent pace and are filled to the brim with cheesy effects and nudity but the final chapter in Hack Job is a bit of a mind-fuck which seems to jump around a lot. It almost seems as if the final segment was shot as filler to keep the runtime close to the 90 minute mark and the obvious change in camera shows that these scenes were most likely shot over a long period of time. Still if crazy low budget, schlocky cheese-fests are your thing, be sure to pick yourself up a copy which is available Here. 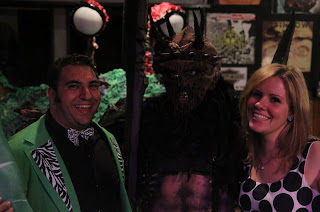