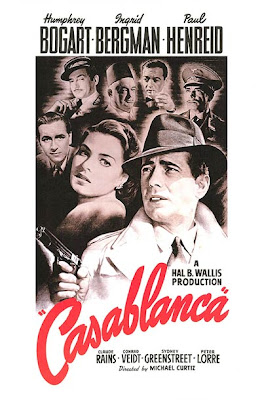 Wanna get sappy for a change? Well there is no better movie then Casablanca to get all watery-eyed to. Filled with memorable lines, a great cast, excellent cinematography and a story that you can't help but love, Casablanca tells the tale of two lovers who were separated in Paris while on the run from the Nazi's. Years later they meet in a swanky saloon called Rick's Cafe and to rekindle that old spark seems hopeless due to the war and other opposing circumstances.

Humphrey Bogart plays Rick, the bitter owner of Ricks Cafe. Tormented by his love for Ingrid Bergman, Rick shows nothing but contempt for the people around him. His choice in friends are the likes of a Peter Lorre, who plays a pick-pocket criminal, Claude Rains (The Invisible Man, The Wolf Man) who plays a witty corrupt police officer and a African American piano player/ lounge singer named Sam. Rick's future seems rather bleak and he gives off the impression that he is waiting to die in Casablanca. That is until Bergman enters his life once again but this time with a husband "Of all the gin joints, in all the towns, in all the world, she walks into mine." 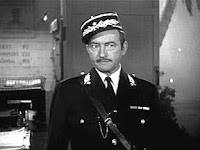 Aside from the misery that most of these characters seem to carry with them Casablanca also has a very humorous side, especially from Claude Rains character. His smart-ass remarks helps Casablanca move along at a nice pace and offers up some chuckles even in some very dramatic moments.

Bogart and Bergman eventually reach a level of understanding and some things just aren't meant to be. Bogart changes his philosophy of "I stick my neck out for nobody" and helps the love of his life escape Casablanca along with her husband. Casablanca is a true classic with a sad yet uplifting ending. Emotionally its to good to ignore and there is only one thing left to do... "Play it Sam". 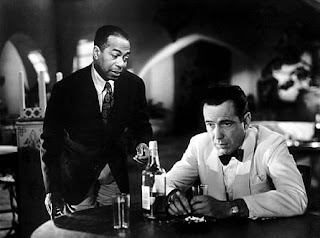 Email ThisBlogThis!Share to TwitterShare to FacebookShare to Pinterest
Labels: Casablanca