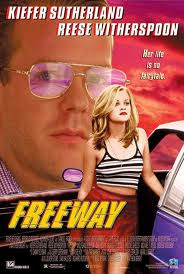 This 90's dark comedy takes the story of Little Red Riding Hood in a completely different direction. Reese Witherspoon plays Vanessa Lutz, A teenage girl with a bad upbringing. Her mother is a junkie/prostitute and her step daddy has been molesting her since age eleven. When the police raid Vanessa's house and arrest her parents she decides to skip town with her dead boyfriends gun. She is abducted by a sick serial killer named Bob (Kiefer Southerland) and the tables are turned once Vanessa whips out her boyfriends pistol. She shoots Bob in the face and runs for the hills. The only problem is that Bob isn't dead and it becomes a game of cat and mouse which all comes to a bloody conclusion at... You guessed it, Grandma's house.

For a comedy, especially a 90's comedy Freeway is very violent and I suppose that is what makes the movie tolerable. The dark subject matter, the foul language and the excessive violence make for a pretty enjoyable ride. The great Sydney Lassick (One Flew Over The Cuckoos Nest, Carrie, The Unseen) shows up for a quickie death scene. We also get some racy racist talk which is pretty unusual for a 90's flick unless of course Tarantino had something to do with it, which he did not.

Check it out for some straight razor slashing, suicide, drive-by shootings, and a deformed, drooling Kiefer Southerland.

Email ThisBlogThis!Share to TwitterShare to FacebookShare to Pinterest
Labels: Freeway