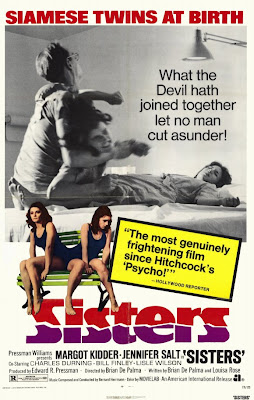 Not enough people pay attention to the early work of Brian De Palma. Before Carrie there was Sisters. This morbid horror/mystery tells the tale of Siamese twins and murder but it tells it in true stylistic De Palma fashion.

Margot Kidder (Black Christmas, Amittyville Horror) plays the part of a conjoined twin who has been separated from her other half. The two couldn't be more different Kidder is a nice girl who wants to live a normal life but her sister is a demented lunatic. Kidder is haunted by what seems to be a telepathic connection to her sister or is Kidder the one who is crazy? These Sisters are in for big trouble when a newspaper reporter witnesses a murder inside Kidder's apartment from her window. Or is it the reporter who is in big trouble? 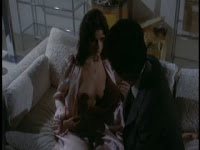 The murder scene is done in De Palma's trademark split-screen and it turns out to be one of the most memorable slash-em-up scenes in horror history. The victim is stabbed in the penis with a kitchen knife, then stabbed in the face. He crawls across the floor and writes "HELP" on the window in his own blood and is then finished off with a few stab wounds to the torso. It makes for a pretty disturbing scene and leaves the viewer thinking it was a lot bloodier then it actually is.

Sisters also offers up some bare breasted action from Margot Kidder and a sleazy looking doctor who hypnotizes women and disposes of dead bodies. We also have a nut house which automatically adds points for me because I love loony-bin movies, especially horror ones. It all comes to a twisted ending with more penis stabbing.

So hold on to your genitals and keep sharp objects away from your sister and check out this slice of 70's madness. 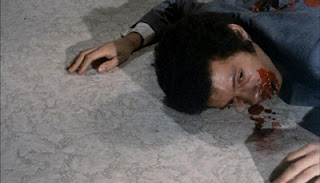